The current state of Sony’s Kuch Rang Pyaar Ke Aise Bhi is no less then a cluster of various Bollywood movie titles into one quite literally.

Every character is High these days in some way or the other and we have one character called Ishwari who just refuses to get her hangover out.

She likes being in her high tipsy zone and god knows for how long she is going to continue living in that zone giving others headache and making them feel puckish. We can add a certain ‘gareeb ki beti’ Radha and Neha to this list as well.

We at Fuze have come up with some Bollywood film names that totally define the current track of our dearest show ‘Kuch Rang Pyaar Ke Aise Bhi’.

Pati, Patni Aur Woh (A Sanjeev Kumar And Vidya Sinha starrer released in 1978)
Wondering who this ‘Woh’ is in Dev and Sonakshi’s relationship? Come on there shouldn’t be any guesses here. Almost every women in the Dixit household minus Ria and Nikki can be termed as being a ‘Woh’ in their life. Telling you Dixit family women are ‘Chudailon ki Dukaan’ as famously called in Hindi.

But the biggest ‘Woh’ has to be none other than creepy mother in law who is behaving worse than a literal ‘Woh’.

Now there are Mothers In law who want to play with their grand children soon after their son’s marriage and here we have this Mother in law who gets all sorts of abnormalities in her body when she sees Dev even slightly looking at his wife, her reactions are as if he committed world’s biggest crime by wanting to love his wife or gaze at her romantically. 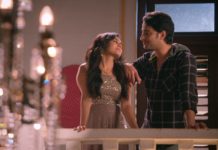