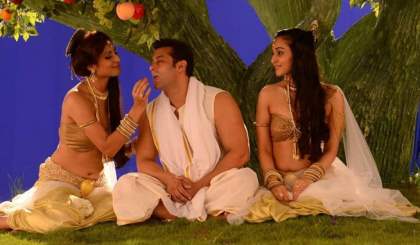 Hell and Heaven have a new address- Bigg Boss

Are you ready for the most divine and demonic experience of your life?

Mumbai, 16th August, 2013: The highly anticipated seventh season of India’s biggest reality show Big Boss is all set to take the viewers to the most amazing journey of hell and heaven as the show begins from 15th September, Sunday to Saturday at 09.00 pm on COLORS.

Bigg Boss this season promises to give the contestants a sweet taste of heaven as well as the bitterness of hell with the theme of the show revolving around the concept of Hell and Heaven! And giving a glimpse of this is the magnificent promo campaign, which shows superstar Salman Khan in a very interesting double role. The promos that have already hit the TV screens shows the superstar in the guise of an angel personifying the pleasure of heaven, as well as in the garb of a devil, representing the menace of hell! While in one promo the actor is being lovingly fed grapes by beautiful apasaras under a tree and hit hard by a coconut by his devil counterpart, in another one he’ll be seen under a waterfall with his apsaras helping him brush, but not until his devilish equivalent makes an appearance by cunningly turning off the water! One of the promos is created on the lines of the mythological concept of Samudra Manthan.

Speaking on the interesting concept of the promos Rajesh Iyer, Marketing Head- COLORS says, “This season Bigg Boss will make sure that you get to see heaven and hell both saath-saath on Bigg Boss Season 7. The message is simple – pleasure or pain, both are inevitable and there is nothing to be taken for granted this season. The only thing that we can assure you is that Bigg Boss 7 is going to be a tumultuous, eventful and one ‘hell–of- a-crazy ride.”

The inmates of the house will be given a glimpse of heaven and let through its golden gates, but their momentary joy will be shattered to bits when the treacherous dark side of hell will take over. The viewers will see 14 strangers struggle for their survival in the house over 90 days and all this will be captured by 70 cameras of Bigg Boss.

Well, looks like his year’s Big Boss on COLORS will be bigger, better and scarier!