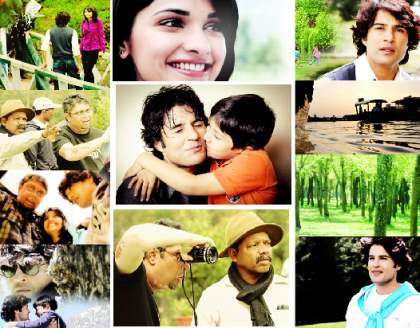 Direction is the art of creating that miracle on screen which impels us to fantasize our dreams. ‘The Man Behind the Camera’ is the real mag­ic man who by the flick of an ‘Ac­tion’ or a ‘Cut’ contrives a fantasy that takes us to another world to live and feel other lives. Fuze got in touch with distinguished Film Director Vikram Tuli who shared with us his vivid knowledge and experience with Film making.

1. Film Making is an art. What is it that excites you as a film maker?

Film making is an art and craft form. The art is to come up with an interesting story and tell it in a way that will entertain the audience. The craft is the technical aspects of making the art happen  As a film maker I get excited in churning out interesting characters and feeling what they feel in the mind, thereby living multiple characters in one lifetime.

2. If not a director then what would you have been?

Maybe a technocrat or a teacher. I don’t really know.

I have seen people in various walks of life doing what they do and enjoying their work; having said that, I would say that film making is the most satisfying job in the world (for me). The worst part is the struggle which actually never ceases to be.

4. A Director holds the major command in the sets. How would you explain that experience of being in command for a unit consisting of hundreds of people?

When we are shooting a film and once I say “cut it”, I see fifty people turning their heads to look at me. They actually want to know “what next Sir?.” My job is to tell them what next so there is no mag­ical experience in being in command of a film crew; it is actually a job to be done kind of experience.

5. Your Movie Joker still is remaining as an untitled movie. Any progress on that?

Yes there is progress on that, we have locked a few titles, but we have evolved, we have understood that a great title means nothing, a great film does.

6. How has it been working with Actor Rajeev Khandelwal & Pra­chi Desai?

Both Rajeev and Prachi are professionals. Always on time. Always polite. Always eager to understand the character to be played. If actors could get even half as professional as them we would have no more chaos in our industry.

7. The Industry is known for tight competition. Do you think that two popular actors of the same genre be at the stardom and still be friends with each other?

I do not know. I think I am not qualified to answer this question.

8. Describe yourself in one word?

9. Do you think Vikram Tuli can exist without film making?

Ofcourse. Vikram Tuli can surely exist without film making but Film Making is what he does best.

11. The person you are closest to?

13. Your favorite Actor/Actress Till date?

14. Lastly, Can you tell Us About Your Future Projects?

The first draft of my next screenplay is already done. We are fine tuning it right now. The subject of the one af­ter that is already locked; so work progressing on all fronts.