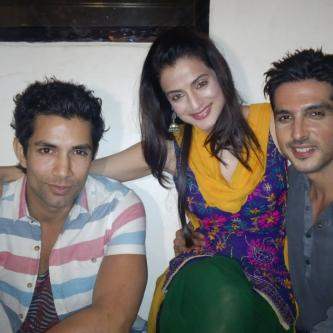 Ameesha on the sets, “The city is beautiful and an important part of our film. The people are very warm and welcomed us with open arms. I play a Punjabi kudi in the film and the role that I am essaying is something that I have never played before on screen. Shooting here has been a wonderful experience which I will cherish forever.” Taking extra special care for her clothes, Ameesha confessed, “I love the Patiala salwars that are worn here. Most of my costumes have a lot of Patiala salwars with a lot of Phulkari work on the kurta, bringing out the   textile richness of Punjab.”

While Zayed Khan, who plays a suave sophisticated guy, is on a eating spree. He said, “Our line producer has got the most fantastic local caterer who sets up a tandoor for lunch. So from the hot kulchas to the various tangdi kababs and reshmi tikkas, it has been a gastronomical experience. And yes, the hot, crispy jalebis with rabdi are what we call the malai of Indian desserts.. I have had to work out extra hard in the gym, so that we maintain continuity with my weight.”

Zayed and Ameesha are joined by model turned actor Sahil Shroff, who just landed from Mumbai a day before. The actor revealed, “For a performer, the first shot of a new film will always remain special and today I gave my first shot. Hence, Patiala will always remain very close to my heart.”

The film is in its second schedule. On its completion, the cast and crew will proceed to Europe for the final schedule. The cast will be stationed in Patiala for two weeks. The film is all set to release on February 28, 2014.

Below is the full detail of the team: