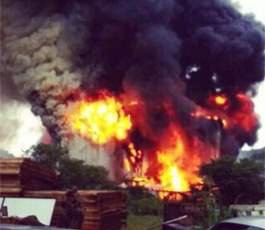 On 25th of September 2013, in the morning, the sets of Comedy Nights with Kapil caught fire and sadly it has burned down to ashes. The set of the show is located at the Filmcity, Goregaon, Mumbai . The fire broke-out around 8 am in the morning. Though, there has been reportedly no casualties as no shooting was taking place during the incident but the studio and the equipments are destroyed entirely. The officials are yet to confirm about the financial losses caused by the fire . Water tankers and fire fighters reached the spot and brought the fire under control. Supposedly the cause for the fire was short circuit.

It is really saddening to see the sets of Comedy Nights With Kapil burned down to nothing. The show has thoroughly entertained and spread laughter on the face of the audiences and host Kapil Sharma is just too good with his comic timing.

@KapilSharmaK9 should not be disheartened by today"s incident. there are millions of his fans who wish and pray the best for him 🙂 big luv

Bollywood Actress Sonakshi Sinha, who is currently shooting for Rambo Rajkumar tweeted about the fire and shared a picture of the incident –

Massive fire on the set next to my @RamboRajkumar shoot this morning! Hope no ones hurt!!! http://t.co/z7MDOuLinV

Kapil also tweeted assuring that they all were fine –

We at Fuze lend our support to the whole crew of Comedy Nights With Kapil and hope that the show will bounce back with double force in future.