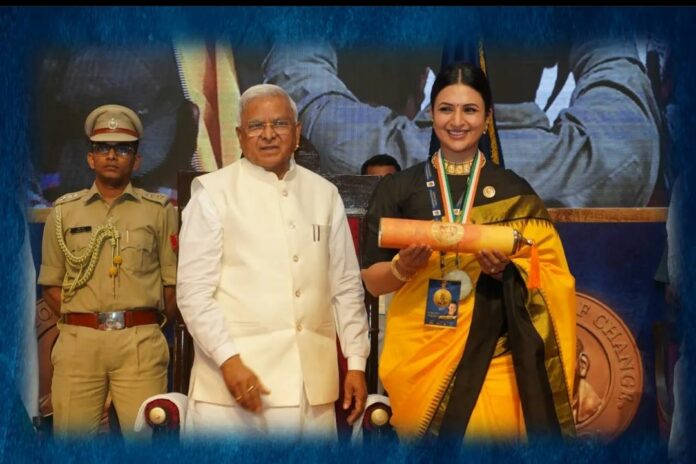 The multi-talented actress Divyanka Tripathi was conferred with the “Champions of Change Madhya Pradesh” Award by the Honorable Governor of Madhya Pradesh Mangubhai Patel ji in her hometown Bhopal on April 12, 2022. Honorable Chief Minister Shivraj Singh Chauhan ji was also present at the event.

It’s not the first time that Divyanka has been honored for putting the name of her city and state on the world map with her excellence in her art. Earlier, Divyanka won “Madhya Pradesh Ratn Sam’man” and “Shaan-E-Bhopal” too and she truly deserves all the recognition.

Divyanka Tripathi is also the “State Icon” of Madhya Pradesh and it resulted in a noticeable increment in the voting percentage in the last assembly elections.

Actor Vivek Dahiya was extremely Proud of his wife as he shared the video of her receiving the award and his caption is all hearts.

Very soon, we will get the opportunity of Watching Divyanka and Vivek sharing the screen space together in a musical short film, Jeena Abhi Baaki Hai presented by Imtiaz Ali.