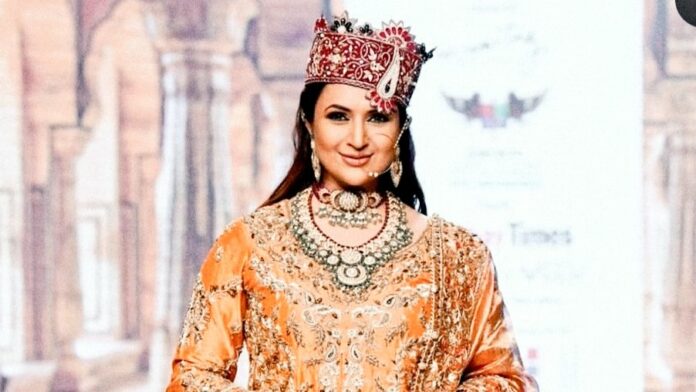 The beautiful and immensely talented actor Divyanka Tripathi dazzled the audience on the first day of Bombay Times Fashion Week. Donned in a sharara with traditional and exquisite zardozi work from her hometown Bhopal, Divyanka looked extremely Royal and drop dead gorgeous as she turned the showstopper for designer Mumtaz Khan.

The collection was endorsed by the Government of Madhya Pradesh and no one other than Divyanka Tripathi could have done justice in presenting the extraordinary heritage of Bhopal on such a platform!

Talking about these crafts, Zardozi is done by embroidering golden coils and beads on a silk, velvet or satin fabric while Bagh print is made by hands using natural, plant based dyes usually on the cotton fabric.

Bagh print originated from the Bagh in Dhar district of Madhya Pradesh. The craft is believed to be handed over in family from one generation to another and the usage of vegetable based dyes speak enough for it’s historical value.