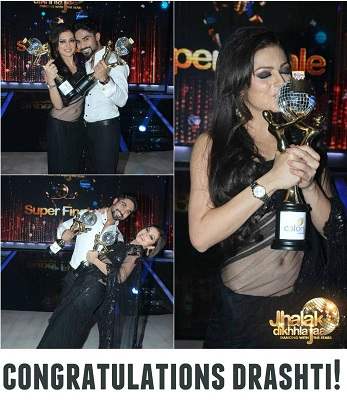 It may not come as a surprise to the regular audiences of Jhalak Dikhla Jaa season 6 that the winner of this season is Drashti Dhami! She has consistently proven herself on the stage of Jhalak with each and every performance. She has tried different forms of dance and has the wow factor that captured the hearts of not only the judges, but also the audience.

While it was difficult to judge who performed the best as all four contestants got 30s this time around, Drashti won because she got the maximum amount of votes. Drashti has a large fan following on Twitter as well as Facebook and they were all constantly voting for her.

Everyone in the top four (Shaan, Sonali, Drashti and Lauren) were deserving of the Jhalak trophy. Shaan was eliminated first followed by Sonali and Lauren. Lauren was the runner up and Drashti was the most deserving of the Jhalak trophy as she progressed from a non-dancer to a dancer and that too while balancing a daily soap is quite an accomplishment. When Drashti was announced the winner, friends such as Sanaya Irani and family went running on to the stage to congratulate her.

Drashti was stunning and graceful in a black saree while Salman wore a formal white shirt and black pants. They both complimented each other as they were handed the trophies and the check for Rupees 50 lakhs.

The show started with Drashti and Salman’s captivating performance followed by the stunning performance of Sonali and Sumanth. Shaan’s performance was calm and beautiful. Lauren did what she has always done, which is dancing as if she was the song. Each contestant had amazing special effects that made their performances breath-taking.

Hrithik Roshan and Priyanka Chopra made an appearance to promote their upcoming film, Krrish 3. Hrithik danced to some tunes with Madhuri and even sang a song for Shaan. He also expressed the desire to share the same frame with Lauren if Remo did ABCD part 2 which made Lauren extremely happy.

Contestants from season 5, Gurmeet Choudhary, Karan Wahi and Rashmi Desai also danced to a couple of songs. Remo’s exhilarating dance was a tribute to his favorite dancer, Michael Jackson. He even danced with Karan Johar and Lauren. Unfortunately, we did not get to see Madhuri dance due to her father’s illness and his untimely death later. Hence, Sonali and Lauren danced instead.