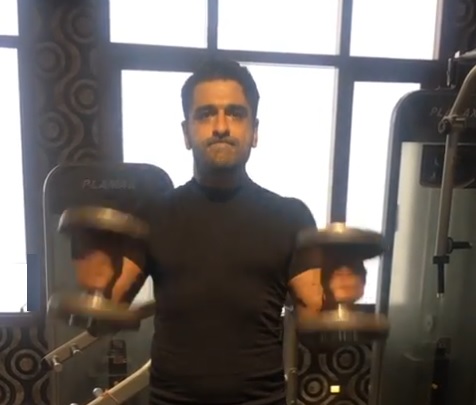 Most people prefer to chill over the weekend and spend their Saturday night partying with friends. However, actor Eijaz Khan is not one of those ( or at least was not that this weekend). The actor decided to hit the gym and through his Instagram post gave us a little sneak peek of his gym session.

Gymla in Shimla . . . Awesome #workout .. thanks to my friends here .. . . and the view. … #mountains , #clouds passing by #picture #postcard houses et all . . . . . Easy days done. Back to the grind from tomorrow. . . . Wish me luck. . . . . . . . . #hoxy in #black in the #gym . done with ma #workout , a lil #training #strengthandconditioning makes me #fit n an #athelete . Prioritise yourself , my #fitnessmotivation . my #saturday my #saturdaynight ie my #saturnight ok. #eijaz #eijazkhan #actor #actorslife #india #indianactor #bollywood #film #hindifilmindustry #tired now #bye . #dontdrinkndrive #humdohumaaraek #janhitmejaari

He also described the gym to be with a view. One could see the clouds, hills, and picturesque landscape through the gym.

Eijaz Khan is one of the finest actors that we have on Indian television who likes to get in the skin of the characters and in the process he has many a times changed his physical appearance to match the character. For example, for his role in Yeh Moh Moh Ke Dhaage he had put on 11 kgs to look the part.

Currently, he is in Shimla shooting for a webseries called Bhram which will be premiering on Zee5 and also stars Kalki Kolchein and Sansay Suri. In his post he also mentioned that Saturday was a light day for them. The series looks to be a thriller and we are excited to see what this stellar statcast has in store for us.

A few days earlier, Eijaz Khan also took us down the memory lane to the times when his show Kkavyanjali days. To those unaware, Kkavyanjali ‘s story line frequently referred to the cast being in Shimla and the visuals were accompanied with maple leaves flying all around. Now that the actor was in Shimla and strolling through the mall road, he too was missing that time. Expressing his gratitude, he shared that each and every memory from that time is still fresh in his mind.

#righthererightnow . . . . . who remembers maaaaaal road from #Kavyanjali where all the MAPLLE . ( also known as maple) . leaves used to hang ? . . do yous rrewmemberrs Niv? @niveditabasu . . . . #nostalgic of the #nostalgia of plastic #leaves falling on my #face . anytime and everytime. . . of walks in #coconut groves full of #snow . . of #trolley dada doing a #musically on trolley . . of me #acting according to the #music . . of #candles #lamps #lowlighting #contrastlighting any #lightning . . . Of the most #REWARDING #FULFILLING and #INNOCENT part of my life …… . . . . Aur Kya kahoo…. . WAQT HIIIIIII RUK GAYA ……. . . . . . . . I remember every moment. Every moment. . Can’t thank @balajitelefilmslimited enough. . . #GRATIS

Seeing his post, we too were transported back to that time. Hope Shimla continues to be the lucky charm for Eijaz Khan and he keeps getting back to this charming hill station to shoot many more shows and treat us with great content.