Ekta Kapoor is known as the queen of Indian television. Almost every project that she has come out with has turned into gold. She has been experimenting quite a bit in the last few years in both TV and digital space with her app – Alt Balaji.

A little birdie tells us that, the lady is all set to make the Indian version of the popular series Game of Thrones. This is going to be fairly large scale project with high project value. This is not the first time she will be attempting something like this. She had made Kahani Humare Mahabharat Ki on 9X but that did not fly with the audience. However, this is totally new concept and the team is very excited about this new project that will be airing on Star Plus.

While the casting of the show is still on we are hearing that Ronit Roy has been approached for the role of Ned Stark. Ruhanika Dhawan who won the heart of people with her performance with Yeh Hai Mohabatain will be seen as Arya Stark. For the role of Jaime Lannister, Barun Sobti and Karan Tacker have been approached. The name that is coming in front for the role of Sansa Stark is that of Niti Taylor. Wonder if she will get red hair for this role and how she will look in the same.

Also while you are getting your head around these cast, let us take a moment to remind you that today is April 1st and we thought this could be a good prank for the day! 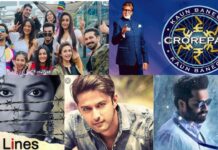