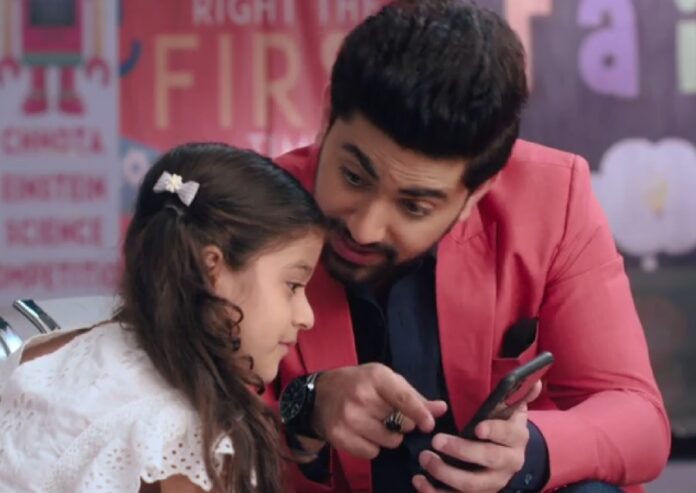 Colors TV’s Fanaa Ishq Mein Marjawan is widely discussed on the social media platforms, especially after the leap. The show has taken a 6 years leap and now Agastya (Zain Imam) and Pakhi (Reem Shaikh) live separately. Pakhi brought her daughter up in Shimla alone, while Agastya is still waiting for that one day when he will be able to meet Pakhi again.

Pakhi is under the impression that it was Agastya who harmed her sister and is determined to keep her daughter, Tara, away from Agastya at any cost. However, fate has other plans and in today’s episode Agastya and Tara finally met each other without knowing that they are father and daughter.

The scene is ‘cuteness overloaded’. Agastya got a good hunch about how tech savvy Tara is. He made her see the robots that his company made. The child got impressed by Agastya and also referred to him as ‘genius’ and named him as ‘Einstein Uncle’. This name is sure to be liked by the ardent fans of the show. Agastya also called Tara ‘cuteness ki dukaan’.

The instant connect between them is adorable and will be loved by the viewers. Tara gave a fair description of how her mother is but it pinched somewhere when she told Agastya that her ‘father is with God’.

It kind of hurts when you have your father sitting in front of you and you telling him that he is no more. That’s unfair on Pakhi’s part for sure to have told the child this sort of a lie! Looks like Pakhi is going to have a lot to answer in future, both to Agastya and her own daughter for all the trouble she brought on herself.

It seems that Tara’s thought process also matches with Agastya. The kid instantly will be liked by you seeing the way she handles the ‘Payel fiasco’ in the episode (Also, who doesn’t enjoy Agastya’s royal ignorance towards her?!)

Now this was the sweetest part of the episode.

Ask us about the most creepy part? Well, now Ishaan seems to be staying with Pakhi’s parents. And his calculation is probably right. The first place Pakhi will ever turn into if she ever decides to return back will at her parents’ place. Hence, it’s his abode now.

It will be interesting to see how the equations are played out henceforth. For sure, Agastya and Tara are going to develop a good bond in a very small span of time.

P.S.- It’s pure fun when Tara says ‘jhoot bolne se naak lambi ho jaati hai!’ and that should be told by this smart kid to Ishaan at least once! Also, the background score for Tara is adorable!