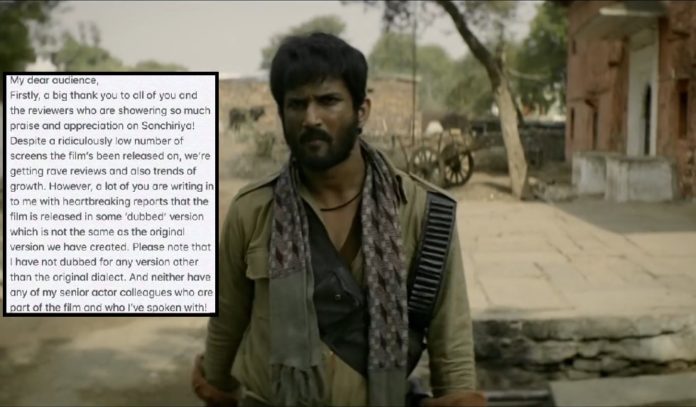 It was Sushant’s first release in 2019, who went on to had another release and blockbuster hit ChhiChhore in September 2019.

However, apparently fans are now questioning why Sonchiriya received less number of screens even in Mumbai. Not that the fans are complaining about it now. They had asked the same question back in March 2019 and had raised the issue on social media asking Sushant the same questions. Reports say that many theatres also exhibited an unofficial dubbed version of the movie that Sushant or his co-stars never had dubbed.

Sushant had replied his fans then that he had no idea about what happened, why the screen numbers got reduced and from where the other dubbed version cropped up.

Today, the fans raised these questions again and asked what exactly did lead to these developments that took place with Sonchiriya and why above all Sushant had no clue about it.

Sushant’s then Facebook post as well as replies to his fans on social media clearly shows that he was upset about it and somehow wanted to take up the matter to the right people. His post also shows that he had asked his fans to report to him about the names of the theatres that were exhibiting the unofficial dubbed version.

Sonchiriya was produced and distributed by Ronnie Screwvala’s RSVP Movies, who had also produced Sushant’s Kai Po Che and Kedarnath.

Sushant didn’t know that all theaters including PVR was playing a dubbed version of his movie #Sonchiriya was. He only realised when a fan informed him. DISGUSTING. Boycott every person from bollywood.@ishkarnBHANDARI @Swamy39 @narendramodi @AmitShah #RepublicIndiaWantsCBI4SSR pic.twitter.com/9o8N9xoOFO

Hw does this happen to an actor?He gets to knw frm online audiences only after release tht its shown in 1/5th number of screens wid random dubbed version #sonchiriya
Nvr heard of ths b4 for other movies #SushantSinghRajput #SushantTruthNow@KanganaTeam @ishkarnBHANDARI https://t.co/N9NsBrrqUb 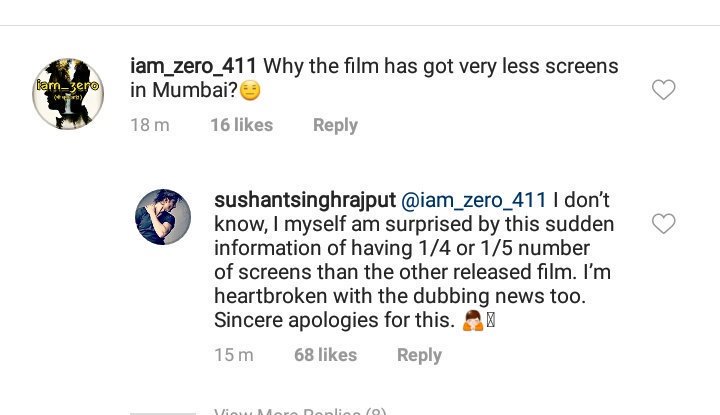 Earlier questions were raised about why YRF’s Paani never got released. Questions were also raised about why Sushant couldn’t do Sanjay Leela Bhansali’s Ram Leela, Bajirao Mastani and Padmaavat. While Aditya Chopra gave statement to police about shelving Paani due to creative differences with director Shekhar Kapoor, Sanjay Leela Bhansali went on to say that Sushant couldn’t do his films due to his contract with YRF and because he wanted to concentrate on those films at that moment.

Sushant apparently also had two films in his kitty that included Chanda Mama Door Ke and a biopic on the first Paralympic gold medalist of India, Murlikant Petkar. But these two films also got shelved and never materialised. Sushant had received training at NASA for Chanda Mama Door Ke as he was supposed to play an astronaut in the film and also he had visited and met the Petkar family a number of times at their home and his home to know more deeply about Murlikant Petkar. After shelving of Chanda Mama Door Ke, the actor reportedly had decided to himself produce India’s first space film.

Sushant’s last film Dil Bechara will be releasing on Disney+ Hotstar on July 24th at 7:30 pm. The film can be watched on the OTT platform by both subscribers and non subscribers.