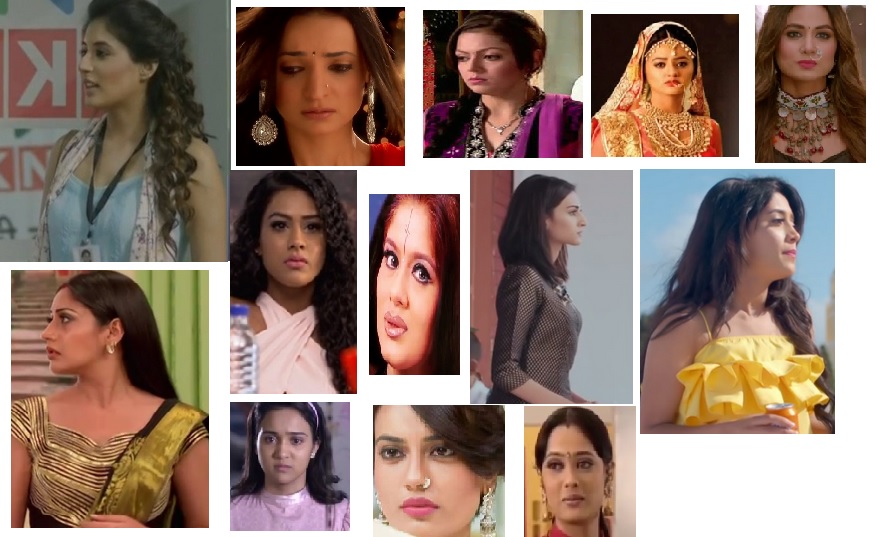 Television has always been a major medium for fashion tips since the time Ekta Kapoor’s saas-bahu dramas became hits.

May be from the era of 2002-2003, a huge number of ladies started getting inspired by the get ups and make ups of the female protagonists and antagonists of television. Before that, fashion was primarily a Bollywood thing for viewers and only big screen actresses were ‘the fashionistas’ for people.

From then to now, we have tried to compile the leading ladies who became the talk of the town for their fashion statements on screen.

If Gauri Pradhan for her role of Nandini from Kyunki Saas Bhi Kabhi Bahu Thi popularized the ‘Nandini Skirts’ in the market then, then Sudha Chandran as Ramola Sickand in Kahiin Kissi Roz and Urvashi Dholakia as Komolika in Kasautii Zindagii Kay taught the art of adoring huge bindis to the audience.

Mona Singh as Jassi in Jassi Kaisi Koi Nahin created an altogether different rage for her looks on screen.

Aamna Shariff’s suits on screen were much adored at the time whereas Ankita Lokhande and Shweta Tiwari created quite a stir with their sarees and especially collared blouses.

Or the bridal attires of Drashti Dhami designed by Neeta Lulla during Madhubala’s grand wedding? Those created some unforgettable stirs among the viewers.

Kritika Kamra is another big name that you can’t miss while speaking of fashion on TV. She can be any day termed as one of the first actresses in t-town to bring the wave of western dresses on small screen. From Kitani Mohabbat Hai to Reporters, she has carried every western style affluently.

While talking about western dresses, how can we forget Nia Sharma in Jamai Raja’s season 2? Her corporate look wearing suits with skirts, came as a surprise for the viewers who had known her only as Mansion of Ek Hazaaron Mein Meri Behna Hai and Roshni of Jamai Raja season 1.

Also let’s remember Helly Shah and Tejasswi Prakash for their Bengali looks in Swaragini that became quite popular during those times.

Coming to the current era. It’s the western and Indo-western looks that form the major crux of style on TV today.

And the three ladies who for sure deserve a applauses for carrying them out and making them popular are Surbhi Chandna, Erica Fernandes and Shivangi Joshi.

Why Surbhi Chandna? – Apart from her being the ‘jeans waali bahu’ on TV, did you notice the way she draped her saree in Ishqbaaz?

More than once, she gave some real fashion goals to the modern girls of today on how to drape a saree in the most trendy way. Whether its a pooja, a conference or a wedding, Anika always stood apart with her style. It was never regular and was always something that looked different from others.

Why Erica Fernandes? – Did you see the long skirts, palazzos or long gowns she wore in Kuch Rang Pyar Ke Aise Bhi? They not only complemented Erica but it was the other way round too. Erica Fernandes carried off her corporate look in the show impressively. Also the the she draped her sarees like perfect Bengalis, it made her look like one of them. Simply flawless she was in carrying all the looks.

Also Read : From Jennifer Winget, Anita Hassanandani, To Surbhi Chandna – Here’s A Look At The A-List Fashionistas Of TV!

Why Shivangi Joshi? – Simply because there’s nothing that she didn’t wear as Naira in Yeh Rishta Kya Kehlata Hai till date. From traditional, western, indo-western to 90’s Bollywood style – She did it all. You can see her adorning Raveena Tandon’s look in the song sequences of ‘tip tip barsa pani’ and even Madhuri Dixit’s look in ‘ankhiyaan milaaye kabhi ankhiyaan churaaye’ with ease and poise.

If you want a comprehensive fashion tip ranging from A to Z as per contemporary standards, you can go ahead and watch her in the show.

We can’t simply miss out the lady who advocated the freedom of women to dress as per her wish on screen. Remember Surbhi Jyoti as Zoya in Qubool Hai? She not only became the voice of reason for every women who are subjected to judgements for their get up but also wore them unabashedly in the show. From western to traditional, Zoya was seen in every contemporary and modern avatar.

It would be a crime if we don’t mention Hina Khan in this list. Her Yeh Rishta Kya Kehlata Hai’s looks were traditional in the beginning. Later they turned subtly contemporary. But as Komolika she created headlines with her avatar on screen. Her boho jewellery, rustic yet sophisticated appearance, hairstyle and ” made her reach the top spots of fashionistas among Television actresses.

Ashi Singh is another name that deserves special mention here. As a girl of today’s generation she carried of the 90’s style and dresses extremely well in the show. At times she made it appear as if she is directly imported into the show from the 90’s era. Truly commendable!

Fashion from yesterday to today has changed a lot. In fact it will change a lot in the future too. But if you are an admirer of fashion, let’s take a moment to commend these women from TV, for they not only set trends but also gave reasons to millions of viewers to watch their shows, we are especially referring to those viewers here who watch shows just to pick fashion trends, styles and tips.

Shrushti Gupta : “So When It Comes To Erica Fernandes, She Likes Experimenting; Surbhi Chandna herself liked this outfit”