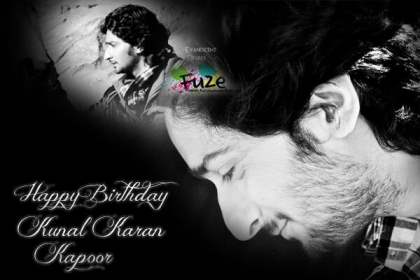 Today is the 22nd of August 2013 and on this very day in the year 1982 a handsome, suave, charming, sweet, intelligent, adorable guy marked his presence on the planet Earth. A guy who today is one among the most successful actors on the Indian Television . Actor Kunal Karan Kapoor was born on this year and he turns 31 this August 22nd 2013.

The actor was first seen as a child artist in a show titled ‘Rajini’. Later on he was seen in Star One’s popular youth-based show Remix, he essayed the character of the studious, nerd Varun. After Remix Kunal was a part of the cast of DJ Creatives’ Left Right Left on SAB TV. He played the character of Cadet Yadhuvansh Sahni a.k.a Yudi. The viewers loved the quiet, computer genius Yudi and were bowled over by seeing the extent he could go for his friends. The actor was also a part of Zee Television’s show Maayka, Star Plus’ Mann Kee Awaaz Pratigya and Rishton Se Badi Pratha on Colors Viacom 18 where he portrayed characters of Sukhi, Angad and Amrik Singh respectively. The actor playing varied kind of roles has made his acting ability worth known.

The actor in the year 2012 bagged the role of Mohan Bhatnagar in Sunshine Productions’ Na Bole Tum Na Maine Kuch Kaha; the serial created an uproar among the viewers and Mohan Batnagar was loved by one and all. A happy go lucky guy who falls in love with a widow with two kids. Whether it was Mohan and his Chavvani’s (Ashnoor Kaur) scenes or Mohan-Megha (Aakanksha Singh) scenes, the actor portrayed the character with such subtle and realism attached to it that Mohan Bhatnagar often left the audience in a state of daze craving for more. The audience fell in love with Kunal playing the doting father, loving son and an adorable husband in NBTNMKK. The viewers loved Kunal, Aakanksha’s pair so much that when the show’s season 1 ended in October 2012, already talks were on for a season 2 of the same show. The show’s second season hit the screen in January 2013 and the show has thoroughly entertained the audience till date. The proof of Kunal’s fan-following is that Na Bole Tum Na Maine Kuch Kaha’s season 2 is heading towards a closure in September 2013 and the viewers are already demanding a season 3.

We at Fuze would like to take this opportunity and wish Kunal a Very Happy Birthday and we would also like to wish him success in all his future endeavours.