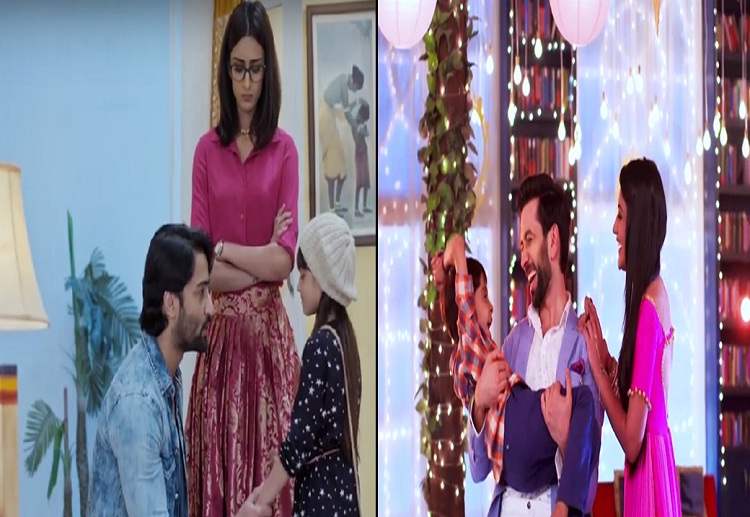 You must be thinking what we are talking about since Ishqbaaz airs on Star Plus and Kuch Rang Pyar Ke Aise Bhi airs on Sony. Both the shows have different kind of stories and a different air time slot. Then what is it that brings the two fandoms together? Well, the topic is ‘Fashion Disaster’.

The fans of both KRPKAB and Ishqbaaz, have been very vocal about their respective female leads’ outfits. While Kuch Rang viewers have objection with Sonakshi’s extra glittering long skirts and the ‘Benarasi’ looking get ups, the Ishqbaaz viewers always complain about Anika’s experimental designer clothes.

Lately, the complains with regards to the clothes given to Erica Fernandes and Surbhi Chandna have reached the limit of sky height. So much so, that the viewers even are trying their level best to make their complain reach the makers.

The funny part in the entire scenario is that some KRPKAB fans requested Nakuul Mehta to forward their message about Sonakshi’s outfits to producer Mamta Patnaik. Seeing the tweets to Nakuul Mehta, Mamta Patnaik funnily tweeted to the fans saying –

Girls please spare @NakuulMehta 😂he has nothing to do with Sonakshi’s wardrobe!

Nakuul Mehta, who is known for his humor on Twitter, also responded to the tweet in a funny way –

Okay, I confess I am actually Sonakshi’s costume designer. I also moonlight as an actor on that other cool show 😉 https://t.co/b4GX1EzIhf

These tweets by the lead actor of Ishqbaaz and the producer of Kuch Rang Pyar Ke Aise Bhi have brought the fans of both the shows together and now they are busy discussing their common grief about seeing their favourite ladies in outfits that according to them are ‘fashion disasters’.

@NakuulMehta hahaha.😂😂no idea on sonakshi.but u can show ur fashion skills on ur onscreen wife Anika’s costumes😂😂afterall u r multitalented😊

@MamtaYPatnaik @NakuulMehta plz for god’s sake give better outfits to sonakshi..every other side actor dresses better than her in the serial

@MamtaYPatnaik @NakuulMehta But he has to do with conveying the message nah..Aap to sunte nahi ! 😂😂😂

@sharica_love You got it Miss!

@NakuulMehta Then do help out Anika too..she too desperately needs some costume changes pronto 😂😂😝

@NakuulMehta Sweet confession😊 But please don’t tell people u are Anika’s costume designer..they will run after u😂 pic.twitter.com/iht4xUvHUN

@NakuulMehta 😂😂 on that note pls tell Gul to alter ur clothes too. I’m pretty sure you are aware of the garbage that poor Anika has to wear.

Also @NakuulMehta u r one of the wittiest on TV right now😎 U crack me up each time with your one liners. Good luck wid everything. Luv you😘

@SweetFeMir @NakuulMehta I am not his fan of his show or even acting ..but this man is such a charmer ❤❤so witty so genuine so loving❤❤

@MamtaYPatnaik Thank God you are atleast aware of the fans reaction but sad you don't do much.. wonder y., even Ronita has better wardrobe

The tweet would have split me up @MamtaYPatnaik, had people blamed @NakuulMehta for Sona's wardrobe … it no that ain't what happened

@MamtaYPatnaik I think you should tell erica only to style Sonakshi! She's into fashion & stuff + ppl love hr and the flack for Sona's style will stop