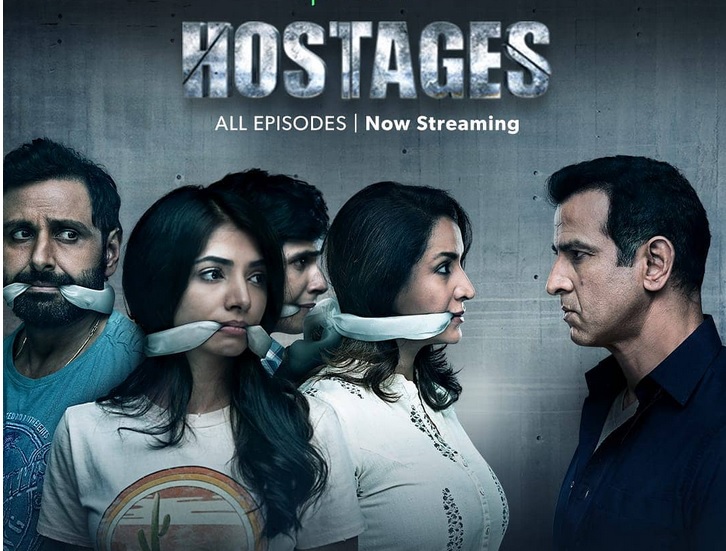 Hotstar Specials’ new addition Hostages starring Ronit Roy and Tisca Chopra stands out for various reasons but the first and foremost one would be – The acting prowess of both the two actors.

Ronit Roy as SP Prithvi Singh and Tisca Chopra as Dr. Mira Anand excelled in the series and are enough to keep you hooked to the show until the very end. The tale is about how the two virtuous and honest souls are made to face dire situations and forced to commit something that hit their morale and virtue badly.

Here’s a quick take on what we liked about the series and what we didn’t.

1. Needless to say it again, Ronit Roy and Tisca Chopra stole the show with their brilliance. Both play their characters with a certain amount of calmness and subtleness. There’s no loudness in their portrayal and they are absolutely just to their respective roles. Tisca Chopra brought in a certain kind of elegance in Dr. Anand that makes you almost revere the honest and credible surgeon.

2. Surya Sharma, playing the role of a psychopath goon losing his temper every now and then was impressive.

3. The show is a declared remake of an Israeli series of the same name. The way the story is tangled between blurred past and complicated present, it keeps you hooked till the end.

1. There are too many plots in the story and then too many sub-plots within each plot.Then there are too many layers in each character and then there are too many sub-layers within each character. By the end of it all or in order to fix the loose ends in your head, you literally need to stay alert in certain scenes. Or just let’s say, the end of the show may baffle you and you may feel like suddenly ‘Why this end?’. As the explanation was not given verbally behind why the Chief Minister was kept alive and transported to Prithvi Singh, it may confuse a set of audience. However, in another way, the end may also keep the viewers waiting for a 2nd season of the series (The original series had 2 seasons).

An intentional move or a cry for help? What do you think Dr. Mira Anand's trying to do? #Hostages all episodes now streaming. Link in bio. #HotstarSpecials @ronitboseroy @tiscaofficial @dabasparvin #SudhirMishra

2. The show relies too much on Ronit Roy and Tisca Chopra’s acting. They are indeed the saviors and covered up a lot of flaws in the screenplay, however, certain things were too predictable and despite a lot of buildup were too easy for the viewers to guess. For example – The chief of Chief Minister’s security staff being one of the people on the wrong side became much clear earlier.

Despite the flaws, we recommend to you to watch it for Ronit Roy and Tisca Chopra. And if you want to use your head constantly while watching it, then make sure you watch Hostages. It’s quite a gripping series with glitches here and there.