Home ENTERTAINMENT Highlights of The Day Indian TV : Daily Soaps And Their Highlights Of The Day –...

Yet another week has come to an end in the world of daily soaps and we are sure you are eager to know on what note your favourite Indian TV shows ended on Friday.

Read below and get to know the highlights of what exactly happened in the TV shows on 25th May 2018.

Ishqbaaz Highlights Of The Day :

– The episode starts with Anika wanting to know what will happen next. Shivaay tells her the circle will continue and they will grow old and their kids will face the same pressures of the outsiders, relatives, media and so on.

– Gauri tells Shivaay to imagine how it will be hold your child for the first time. Imaginary clips of Shivaay – Anika, Om – Gauri and Rudra – Bhavya with babies play out.

– Shivaay adds they should have a baby only when they both are ready for it and want it and not because of the society pressure. Shivaay goes on to add how the society romanticizes motherhood and parenthood and how everything including the relationship of the parents changes after having kid.

– A imaginary scene plays of the three pairs – Om – Gauri, Rudra – Bhavya and Shivaay – Anika highlighting the changes in their equation and relationship post the arrival of Rikara, Ruvya and Shivika.

– Shivaay and Anika come back to the reality and both are of the opinion they don’t wish to fight like that even in a dream. Shivaay says a baby is a beautiful turning point in life but only if it is out of will and not because of society pressures.

– Daadi asks Om and Gauri their opinion on the matter. Gauri says she would like to be a mother and a child strengthens the parent’s relationship. Om adds whatever Gauri’s decision is, he is with her.

– Om adds whenever he becomes a dad, he will strive hard not to be like his father. Shivaay tells Om he will be the best dad.

– Shivaay wants to make sure Daadi is not disappointed listening to the opinions. Daadi in-turn accepts whatever Shivaay has said is right. She adds saying you people have to take the responsibility so the decision also should be yours, so that responsibilities don’t weigh like a burden.

– Anika tries to walk away from the hall, when Shivaay holds her back wanting to know if she is ok. Anika tells Shivaay she has understood he is not ready, when Shivaay counter questions her if she is ready, she walks away.

– Shivaay reaches a teary Anika in the room and he sees the room having a cradle, Anika hides a bib which has ‘Shivaay Junior’ written on it, Shivaay reaches for it and he makes it out that Anika was trying to convey this thing to him in the morning.

– Anika and Shivaay have a conversation. Anika tells Shivaay she thinks she is pregnant and is not sure yet as she has not taken any test. Shivaay apologizes to Anika profusely.

– Shivaay goes on to assure Anika he is with her all through and the kid is theirs, so is the kid’s responsibility. He tells her whether the test result comes out positive or negative, but he is with her. Holding on to a teary Anika, he asks her to stop crying and once again assures her, he is with her come what may.

– The precap highlights Shivaay waiting for Anika and as Anika walks in, Shivaay asks her about the test results! 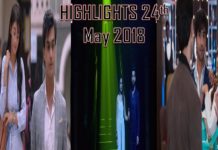 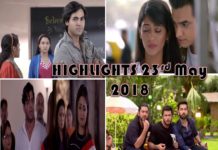 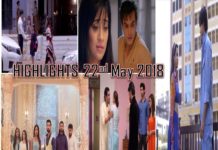