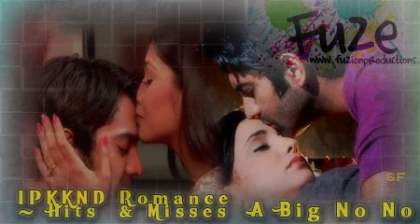 Star Plus’ hit show ‘Iss Pyar Ko Kya Naam Doon?’ which is one among the most viewed show by the masses on the channel, is apparently creating some befuddling situations in the recent times. When the viewers were anticipating a thorough romantic episode between Arnav & Khushi last Friday, 20th July 2012, they got to watch Anjali’s despair & discontentment for the love her brother Arnav has for his beloved wife Khushi.

It seems the gloominess in Anjali’s life has convinced her that everyone around her should live a life deprived of any love and happiness. Unknowingly, she is destroying the lives of the two Raizada brothers and the two Gupta sisters. It seems that Anjali is bent upon snatching away the happiness from her brother Arnav & his wife Khushi’s life, a couple who have seen hell & back just because of her (Anjali’s) husband Shyam Manohar Jha. Although, Anjali’s character was one of the most loved characters in the show earlier but recently the words uttered by Anjali for her brother Arnav  in the show though were out of insecurity, but were naive, trivial & uncalled for, which may lead to her character assassination in future if this tendency of story- telling is continued by the creative’s & the production house.

Moreover, the CVs are trying to feed the audience with the same kind of scenes again and again. The funny part of the romance between the leads Arnav & Khushi is that their romance always comes with an interruption. The interrupters can be a mere cell phone, a bunch of goons, one of the servants among the Prakash brothers or even the entire Raizada Family together. Whenever Arnav Khushi try to get a little intimate, their romance is literally killed and the viewer’s anticipated excitement is ruptured by these interrupters!!!This kind of interruptions knocking every single time the couple gets a little cosy is leaving behind a frustrated and perplexed audience. We are still waiting for the CVs to give us an uninterrupted Romantic Sequence between the “Married Couple” who are not at all treated as if they are ‘married’ by the family.

We can only hope that the coming week will provide the viewers with some quality romance between Arnav Singh Raizada & Khushi Kumari Gupta Singh Raizada without much interference & interruptions & we also hope the CV’s get back the old loving, caring Anjali. Although getting to see the ‘Old Anjali’ seems like a distant dream now. All we can hope is that Arnav- Khushi are given the due privacy which they deserve ‘Being The Married Couple That They Are’ in future.