Home ENTERTAINMENT CELEBRITIES “It’s a treat to the eyes to see him perform and I... 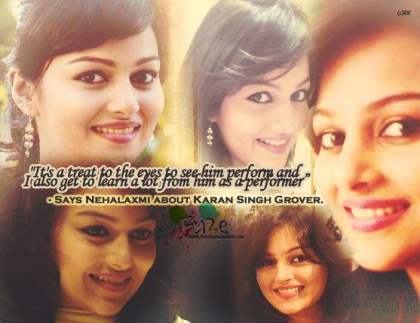 Recently, Fuze got the privilege to get to know the real ‘Nehalaxmi Iyer’; the actor behind the character of Najma in Zee Television’s (Zee TV) hit show Qubool Hai. The actress plays the sweet, adorable sister to Asad Ahmed Khan (Karan Singh Grover) in the show. Read it all only here.
1) Did you always want to be an actress, how did television happen to you?
Yes, always since my childhood. I am a child artist actually. I Have done a couple of serials as a child. Banegi Apni Baat and Hum Panch to name the most popular out of the list. Have also done two movies, Taal and Tarkeeb during that time. When I was in the 6th grade, I took a break for higher education and got back to television with Naa Aana Iss Des Laado and since then there is no looking back.

3) What is the best and the worst part of being in the small screen industry?
The best part is that your are showered with so much of love and affection from people. It feels great that the hardwork that we put in by working round the clock is paying of in this way. And definitely the worst part would be the hectic schedules , not that I’m complaining much but that would be the only con I have faced in the industry as everything else is just too great about it.

4) On days when you are not shooting what do you do?
Well I spend some quality time with family. Catch up with some good cinema. Hangout and chill around the city with friends.

5) How is it sharing screen-space with Karan Singh Grover in Qubool Hai?
It’s great sharing the screen space with him. I call him Karan Bhaiya as he is very affectionate towards me and really treats me like his younger sister offscreen and keeps giving me fitness tips. It’s a treat to the eyes to see him perform and I also get to learn a lot from him as a performer.

7) Are you a prankster on the sets? If yes tell us a prank you have played?
Yes. I am an absolute prankster. I keep playing many small pranks with Ketaki Kadam aka Humeira during breaks. I have played so many pranks that I have lost count and can’t remember any exactly. Will let you know next time I play a huge prank on the set.

9) As the show of Qubool Hai is progressing, will the audience get to see Najma’s character evolving as a whole?
Yes, definitely the writers and the producer are planning something great for me is what I have heard. When and what I have no clue as of now. But just hope people like the ways Najma’s character will shape up.

10) Qubool Hai is seeing some interesting twists and turns. What is in-store for the audiences’ next in the show? The audience are hoping Asad-Zoya say Qubool Hai to each other; so will they or won’t they any clue?
Even I hope Zoya and Asad get married as soon as possible. We have had too much rona dhona at home to handle. I am sure something interesting is in store for all.

11) A Message For Your Fans & Fuzion Productions?
I would just like to say a huge thanks to all the lovely people out there for loving me and my work so much. I am so glad and overwhelmed to have received so much of love by all . Last but not the least thanks alot Fuzion Productions for being such a great medium to reach out to the people so that they can know the real Nehalaxmi . All the best.