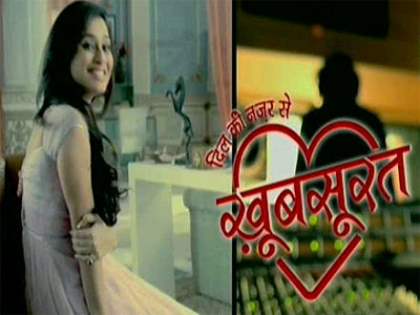 One of Sony Entertainment’s most talked about shows, Dil Ki Nazar Se Khoobsurat completed its 100th episode on Friday 12th July 2013. Khoobsurat, as it is colloquially known, is the story of Aradhya (Soumya Sheth), a girl who is too blinded by superficial beauty to see the beauty which lies within. From childhood well into her college years, this attitude acted as a barrier between herself and people who wished to befriend her. One fine day, a radio jockey named Ehsaas came into her life. Although she had not seen him, she fell in love with his essence. This thought pleased Madhav (Rohit Khurrana), who was actually Ehsaas. Madhav unlike his best friend Rahul (Abhishek Malik), was not exactly Prince Charming. This displeased Aradhya but she soon learned to love him. On the occasion of their 100th episode, the cast and crew celebrated by having Aradhya and Madhav’s adopted son, Ehsaas (Eklavya Ahir), cut the cake. Ehsaas came into the family as Aradhya’s reason to live after Madhav’s demise. We wish the entire team of Khoobsurat a 100 more episodes to come.