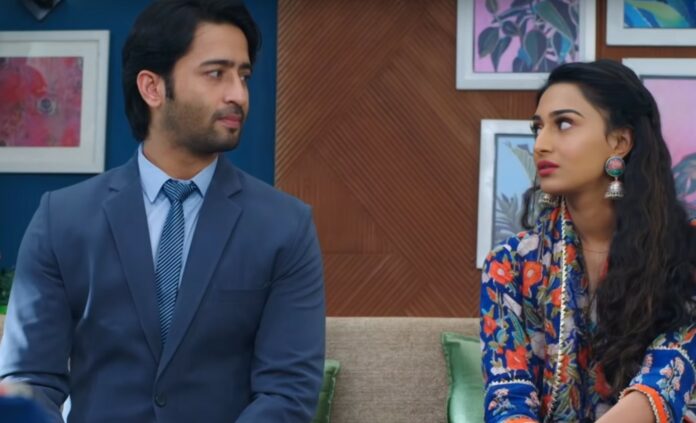 Problem Alert. The present track of Kuch Rang Pyar Ke Aise Bhi 3 may raise many questions in the minds of the viewers. The new interior designer hired by Dev Dixit in his office, wants to become his wife. As usual, Dev has no idea about her intentions and the poor man has started sharing his tiffin with her.

We would have all the reasons in the world to dislike the new interior designer, Sanjana, who despite knowing about Dev being married is obsessed about him and wants to deliberately snatch him away from his family.

She also realizes that Dev is deeply in love with his wife, is a caring family man, yet she has all the hopes in the world that one day Dev may decide to change is ‘support system’ Sonakshi and choose her.

Sadly, these types of characters exist in reality. No way we can deny that such women are there only in fictional stories. However, as I personally dislike men or women who lack basic morale in life, I would not invest much words on her. People with less morale many a times win in reality, but as this is television and the platform still runs high on morale owing to its target audience, we can also have the desperate 100% surety that Sanjana’s hopes will fall flat in the end.

But the big question is – Can she provoke Dev the way she is planning?

There are some people in the society who would use those cliche words and they may come up in the show too saying that ‘what can a poor man do when a woman decides to provoke him?’. These words act like the best excuse to get the man clean off his hands from the deed. Let’s see if such words are uttered in this show too by… may be Maami?

However, that’s a far fetched thing. Right now, Dev has no idea that the woman he shared his food with is hitting on him. But the women around him already do not like his friendly relationship with her. Whether it’s Elena or Sonakshi – The discomfort is very apparent. I am sure, Dev has worked with hundreds of women before.

I remember the best one was Tina, who even went ahead to create a marriage profile for Sonakshi on Dev’s orders and she was the one who selected Dev’s shirts too! In fact, Tina was probably Dev’s another ‘support system’ and he didn’t know how to operate without her in the very first season before he fell for Sonakshi. But never ever anyone or even Sonakshi felt anything amiss about Tina’s intentions.

This is probably an instinct of woman that is telling all these women around Dev that ‘Sanjana’ is not as harmless as Tina was. But this instinct may create trouble as Dev is still unaware of it and rest assured he will remain unaware unless Sanjana tells him about her feelings on his face or it gets revealed in a very uncomfortable manner.

Are we going ahead to witness some sort of obsessive love by Sanjana for Dev? Probably yes. Because honestly speaking, it’s very hard to believe Dev Dixit can cheat anyone in his life, forget cheating his wife and children. He is simply not that smart. In fact, if anything goes wrong, he will himself blurt it out. He is not someone who can be in an affair and hide it. That goes against his character. He is innocent in these matters and

All the more, even if he end up getting into an accident with Sanjana, his mother Ishwari, may not take it very sportingly in this case at least. And that’s a scary case for Dev.

The marriage counselor’s words here are important. They need to walk together, talk and find out solutions to their problems together. Dev and Sonakshi right now do not only need romantic moments. They need to talk about their regular days and things too.

They need to develop the trust that they had on each other. Unconditional and irrevocable trust. The rock solid trust will make Sonakshi handle matters better the next time when someone tells her on phone  about how delicious her ‘tofu’ was, that she should send some more of it for her or even ask her if her husband had saved her number on his phone. You do understand what I mean by that, right?

NOTE (strictly for fun) : Seeing that lunch sharing scene, a thought had crossed my mind. Years ago, when I had joined my first job, the MD of my company once took us for a group dinner. While having our dinner, sir had asked us about who gets along with whom the best among his team. After some revelations, he said, it’s always easy to guess in an office structure who would become great partners in crime.

On your first day, the person with whom you will share your lunch, ought to become a long time and close acquaintance of yours. So people, if you don’t like someone or want to keep a distance with that someone, never share your lunch on the first day with him/her. That person may cling to you for a long time.