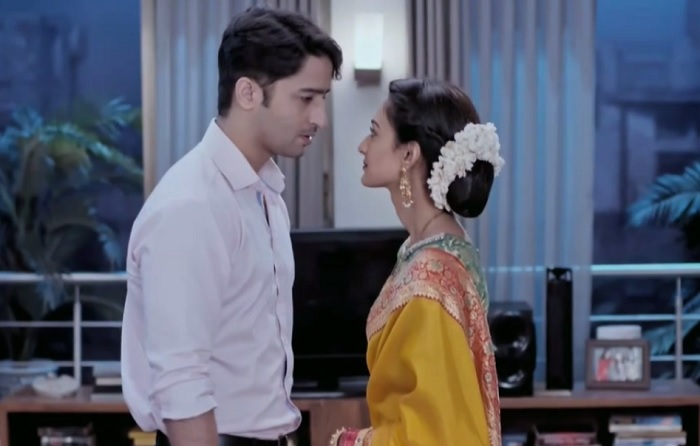 This article is a following piece to our yesterday’s article ‘4 Times Dev Dixit Left The Platonic Way Of Expressing Love‘. Owing to the response we received on the earlier article, and the episode that aired yesterday, another piece acknowledging the bold step by Dev is something that he deserves.

In yesterday’s episode, shockingly, Dev Dixit expresses his physical desires to Sonakshi as well. No, no, we aren’t complaining at all!

This is in fact normal as they both are married now. Dev, with his lack of such expressions were already giving the viewers vibes about whether he is devoid of any sort of hormones.

However, his advances yesterday made it clear that our 8 years old Dev is now really the 28 years old husband of Sonakshi. here’s a little sneak peek into the moments, gestures and words that stood out in the episode –

Laughter Riot With The Bengali And UP Tadka

The DevAkshi scene deserves some praise for its normal and not over the top conversation between the couple.

The way Dev and Sona laughed with each other on how she said ‘Sara Din Taa Maati Galo Amaar’ (my entire day got wasted) or how Dev aptly mimicked Daadi Bua with ‘Bahuriya Laali’, would make the viewers laugh along with them.

It was one of those light moments wherein the makers showed how unaffected Dev and Sona are still from their complicated surroundings.