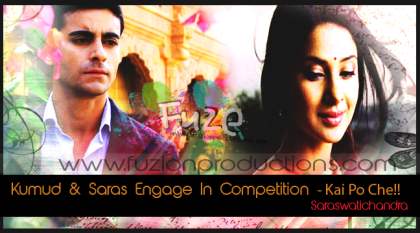 Saraswatichandra, the current sensational show of Star Plus, finally had the two lead protagonists face themselves. Although, the meet and greet has not been a very peaceful one,still it seems that only a game of rivalry will bring them closer to each other. Inspired from the Gujarati Novel by Govardhanram Madhavram Tripathi, this show has the old master touch of Bhansali and is of top-notch class. The show is the prime focus at 7:30 pm nowadays and Gautam Rode as Saraswatichandra and Jennifer Winget as Kumud are playing their parts by giving out their best.

Sanjay Leela Bhansali’s Saraswatichandra is gearing up towards a competition between Kumud and Saras. After Vidya Chatur’s factory been engrossed in fire, Kumud and Sarasengage in war of words as deep anger started surrounding the recent incidents. Kumud leaves the viewers in utter silence as she calls Saras a self-centered person!

Understanding Kumud’s emotional standing, Gun urges Kumud to apologize and look beyond the feelings trapped within heart. Echoing the words of Kumud within his mind, Saras challenges Kumud that she cannot shy away herself from him, only later to engage in a kite flying competition. This Kite flying game is undoubtedly going to remind us of Bhansali’s evergreen film ‘Hum Dil De Chuke Sanam’. It is to be seen who cuts the kite in this upcoming competition and who gets to yell a ‘Kai Po Che!!!’

Surely these little arguments and their verbal fights will let them know each other better. Love will only flourish when they will perceive and recognize each other’s virtue.Will Saras andKumud accept each other’s goodness or will their egos overshadow their true destiny of love? To know morekeep watching Saraswatichandra…Mukammal Mohabbat Ki Adhuri Daastaan from Monday to Friday at 7:30 pm only on Star Plus.