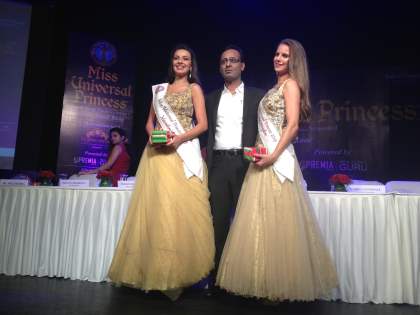 Premia Group adds another first to their repertoire to become the foremost in bringing one of the top beauty pageants of the world to Indian soil. Miss Universal princess 2013 is all slated to dazzle India, with Premia Group powering the show and being associated with the coveted pageant as the Sponsor. The “Real Estate Guru”, Tarun Shienh, never the one to fall short of innovative ideas, has made this promising association possible wherein two immensely admired names of their respective industries have come together to present an event of grand stature.

Miss Universal Princess is a global beauty pageant that showcases some of the aspiring and world’s most talented divas and includes fashion world’s heavy weights such as former participants of pageants like Miss Universe, Miss World, Miss World Earth and Miss International from various countries. The event presents an ostentatious platform to the contestants and grandeur for the audience the likes of which have never been witnessed in India.

Premia Group, a leading Real Estate organization and its visionary CMD Tarun Shienh, have put immense efforts to bring this trendy pageant to the subcontinent. The event presents a chance for Indian audiences to familiarize themselves with the faces and personalities from the world of fashion that have been scorching ramps all across the globe. These global beauties are all set to ‘walk the walk and talk the talk’ and compete it out for the title of ‘Miss Universal princess 2013.’ The pageant will also see Mr. Tarun Shienh, The “Real Estate Guru”, as one of the esteemed members of the jury comprising of eminent personalities from all walks of life and who will be the ones to adjudge the contestants. The event intends to bring about unity and forge peaceful relations among the nations of the world.

Tarun Shienh, when questioned about his association with the pageant, replied, beaming with pride, “We, at Premia, are committed to undertaking endeavors for the society and for the causes we believe in. We have been associated with numerous social causes in the past. This pageant is again one to promote the much needed peace among nations. Miss Universal Princess is, I think, the perfect platform for spreading the message of harmony and accord. We are also proud to be the first ones to bring this to India. India is today recognized as one the major global forces. This event will help bring Indian audiences the taste of an international title like this and at the same time, project India’s image as a host in the global scenario. We have worked tirelessly towards this association and are extremely content to see it taking shape so well.”

Adjudicating the competition, Mr. Tarun Shienh has been given a great honor by the organizers of the event in recognition of his key role in bringing the title race to India. Being a member of the jury, The “Real Estate Guru” will be sharing a position of great responsibility and pride with a select and elite group of individuals from across industries. Never one to shy away from a new role, Mr. Shienh will be displaying his charisma and intellect, albeit in a very different setting and capacity this time around. According to him, he is pretty excited about it too. He was quoted as saying, “This is a unique opportunity for me. I have delivered talks, been an arbitrator, been invited as chief guest in various events and lauded numerous times, but never have I had a chance to be a jury member at such a prestigious platform. I will try and do justice to my job as a member of the jury.”

The pageant is all set to mesmerize India this winter. Whatever you do, it is a sincere advice not to miss this grandest of all stages and let yourself be captivated by the entrancing spectacle.