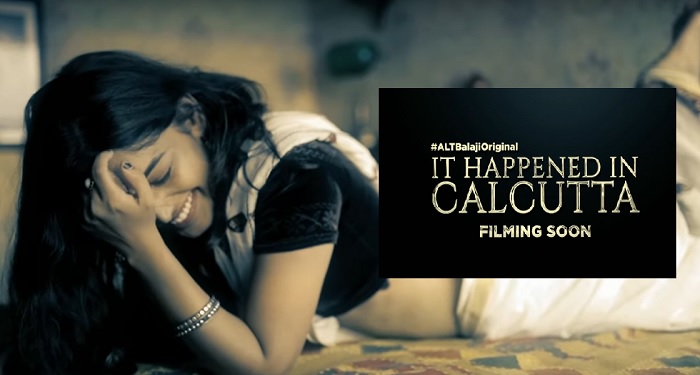 As we reported earlier that ALTBalaji, one of India’s favorite digital content platform is going to bring a love saga, “It Happened In Calcutta” very soon and more than three hundred girls auditioned for the lead role of Kusum.

Also Read : ALT Balaji’s “It Happened In Calcutta” Saw Auditions Of More Than 300 Girls For The Lead!

Now the news is, Ekta Kapoor finally found her Kusum in a model turned actor Naghma Rizwan and the introduction clip of Naghma as Kusum is simply enthralling.

The content queen already informed via a tweet that the male lead, Ronobir will be played by the very dashing Karan Kundrra and if we picture Karan and Naghma together, we can already feel the sizzling chemistry.

Before ALTBalaji shared the introduction video of Kusum, Ekta Kapoor shared via a tweet that tells us, what we can expect from this love saga. She tweeted –

Soon in an hour or two launching a fave that’ll launch a 1000 ships naaaah just a show after a 2.5 year wait! #it happened in Calcutta is a love saga based in d ‘60 during the cholera epidemic n then in 70’s during d war! A love blooming admist tragedy!

Ronobir is played by @kkundrra ! We will soon launch d face playing kusum! My most ambitious period love saga !!!!

A love blooming amidst tragedy!! #ItHappenedInCalcutta A love saga with the backdrop of the Cholera outbreak and the ‘71 war!! With over 2 years of hard work and research, finally it’s time to begin work on my most exciting bag till date! Again a big thank you @ektaravikapoor pic.twitter.com/qEninhtDMD

“It Happened In Calcutta” is set in the 1960s and is the story of a strong-willed girl Kusum who aspires to be a doctor and joins the Calcutta Medical College in order to achieve the same. Little did she know that she would bump with the arrogant, highly confident and uber handsome Ronobir who will turn out to be a huge distraction.

It would be really interesting to see how Ronobir and Kusum will fall in love with each other and the twists that would follow in their love tale.

Watch the introduction clip of Naghma Rizwan shared by ALTBalaji below –

Our quest for that perfect face over 2.5 years led us through 300+ auditions across India… Introducing our new talent Naghma Rizwan as Kusum! She will be starring with Karan Kundrra in our upcoming web series #ItHappenedInCalcutta. Filming soon. Stay tuned for updates. . . #ALTBalajiOriginal @ektaravikapoor @kkundrra @naghma.rizwan @balajitelefilmslimited @chloejferns @aadorem @srkapoor Video courtesy: @awkwardbong