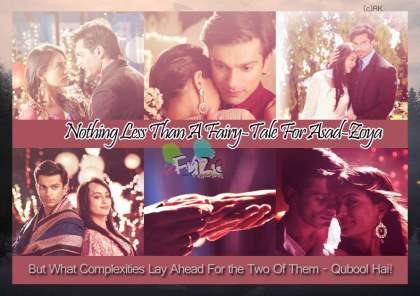 Love is a emotion which has the ability to melt a stone-hearted person and make one believe in and fall head over heels for the other person. Asad Ahmed Khan (Karan Singh Grover), the lead character of Zee TV’s number 1 TRP daily soap Qubool Hai produced by 4 Lions Films is readily proving this phenomenon in the current ongoing track. Asad never thought that a day would come in his life when he would have fallen head over heels for the same girl whom he once wished leaves his home soon. The fights, arguments, tears, guilt, angst in Asad-Zoya’s relationship all seem to be a ‘Once Upon A Time In The Past’ today. Their life is no less than a fairy-tale where their destiny, fate is smiling upon them and showering them with undying, unconditional pure love.

The current track in the show is indeed intriguing the viewers and is so catching up pace. If on one hand the audience witnessed Asad, Dilshad (Shalini Kapoor Sagar), Najma (Nehalaxmi Iyer) getting to know the real face of Tanveer (Amarpali Gupta) or whether it was out in the open for the audience that the guy who has come claiming to be Vikram, Rajni’s husband is a crook, all this and more have kept the viewers’ interest in Qubool Hai intact. For a very long time audience wished to see Tanveer facing the wrath of Asad Ahmed Khan’s famous anger and the day Tanveer’s true face was unmasked the viewers surely got to see the Angry Young Man back in Asad Ahmed Khan and it further strengthened the belief that true love always gets its desired destination and love will always triumph over evil.

The audiences further witnessed with the ouster of Tanveer some love-dovey romance going on for the lead couple of the show, Asad-Zoya. The earlier Arrogant, Rude or in Zoya Farooqui’s words ‘The Akdoo Ahmed Khan’ transformed into a perfect prince charming, a guy which every girl would dream of and Asad started fulfilling Zoya’s wishes no matter how small, big or weird or unattainable they were. One could not help but sigh and think wish they had a guy like Asad Ahmed Khan in their lives each time Asad fulfilled Zoya’s wish; whether it was breakfast in bed where Asad cooked for his beloved bride-to-be or whether it was Asad adorning and being Salman Khan and dancing on the actor’s famous ‘O O Jaane Jaana’ from Pyaar Kiya To Darna Kya’ in a jacket and show-off his abs, or whether it was Asad illuminating lights as stars and fulfilling Zoya’s third wish of holding hands in the shade of the stars or finally if it was Asad fulfilling Zoya’s fourth wish of the moon, Asad capturing the Moon in their engagement ring which has brought them together and tied them together every single time. The complex and quite Asad Ahmed Khan has learnt to voice his feelings.

One thought which comes in every mind when they are seeing Asad and Zoya is a very popular Hindi Phrase ‘Kissi Ki Nazar Na Lage’; but it is said that when happiness becomes too much, there is at least one evil-eye that is cast upon you which leaves the future in hanging. Asad and Zoya who are at the moment lost in their world of joy and immersed in the auspicious festival of EID are unaware of the storm that is coming their way. Love without difficulties, ups and downs is very rare to find. Asad and Zoya have faced highs and lows in their relationship but yet now again it will be the test of time and test of fate pitied against Asad Ahmed Khan and Zoya Farooqui’s true love. Asad has vowed to himself that he would bring Zoya’s father during EID thus fulfilling Zoya’s fifth wish.

Asad being the true to his word, a true gentleman is seen to be taking every possible step to get Zoya’s father in front of her, the main reason with which Zoya flew to India all the way from New York. While the efforts taken by Asad is commendable, it still leaves a sense of apprehension that what will Asad’s reaction be when he will get to know the love of his life, the girl who has taught him to love, is the illegitimate daughter of Gaffur Siddiqui (Tej Sapru). Asad’s dislike for the Siddiquis, his father Rashid (Vaquar Shaikh), his father’s second wife Shireen (Shabnam Sayed) is a known fact, so now if at all Asad gets to know Zoya shares her blood with Gaffur, Where will it leave Asad? How would Asad react? Would he be able to accept Zoya who he knows is the daughter of the enemy? The enemy who is responsible for the hardships he, his mother Dilshad have gone through. This surely create a sense of unease because after all this difficult situation, after Tanveer’s ouster, finally the viewers are getting to see Asad, Zoya together but will the past come to haunt Asad and Zoya’s present and destroy the future which the two of them have been dreaming of?

In the coming episodes the audience will also witness Asad sponsoring the EID party in-order to identify Zoya’s father, the gesture is sweet but the main point here is Asad would ask for CCTV cameras to be installed everywhere at the party premises. So here Asad is doing this for finding Zoya’s father but yet we ought to wonder what other truths of the past would be captured in the CCTV camera. While the who’s who of Bhopal are invited to the party we wonder if Najma and Imran’s past relationship will be out in the open. If Najma’s love for Imraan is revealed then where does it leave Nikhat (Archana Taide) who believes in her love Imraan and believes that he would come for her this time around. One thing is for sure, if Najma and Imraan’s truth is out in the open then this would just add fuel to the already existing family feud between the Khan’s and the Siddiqui’s . Najma’s love for Imraan would only complicate things further and this time again may be Dilshad would be blamed for no fault of hers by Razia and Shireen..

We ought to wonder if Dilshad is yet again insulted for the doings of Najma by the Siddiquis then if Asad after getting to know that Zoya is Gaffur’s daughter would keep her tied to him just as a way to get back at Gaffur and forget the love his heart has for Zoya or would he break all ties with Zoya once Zoya’s father is revealed. Going by our analysis both the cases have a possibility to happen. But we at Fuze also believe that both Asad and Zoya have come a long way, today they are at a stage where their love gets the highest priority. With all probability, if Najma’s truth is revealed and Gaffur-Zoya’s relationship isn’t revealed then Zoya would stand by Asad and be his pillar of strength and support him in this tough phase where it is likely that his step yet dear brother Ayaan too would pick Nikhat over Asad.

In another case if both the truths are revealed, Asad-Zoya might tie the knot and yet Asad would have a wee bit of resentment towards Zoya since she has the blood of the enemy running in her veins. These are all just probabilities and possibilities of what could happen.

On the other hand the audience have also been seeing Razia (Alka Kaushal) torturing Badi Bii (Vidya Sinha), so on the occasion of EID we ought to wonder how long will Razia continue her indifferent charade with regard to Badi Bii being missing. Tanveer who has been away from the screen for nearly two weeks now will soon make her re-entry while the EID festivities would be proceeding. With Tanveer back in the picture, with Razia never wanting Gaffur to be aware that Zoya is his daughter, with the complex Najma-Imraan-Nikhat’s relationship in the list, it will be test of destiny and time for Asad and Zoya.

“When Love Calls, All Hurdles Are Surpassed. But What Is In-Store For Asad Zoya – Qubool Hai …That Will Be Seen As The Story Unfolds. But In All Probability Whatever Happens Would Only Strength Asad Ahmed Khan and Zoya Farooqui’s bond paving way for a better tomorrow.”

Don’t forget to watch Qubool Hai Monday to Friday at 9:30 PM and this weekend join Qubool Hai along with various other stars from Zee TV from Pavitra Rishta, Sapne Suhane Ladakpann Ke ,Punnar Vivaah – Ek Nayi Umeed and other Zee Television’s popular cast shaking legs and adding spice in this weeks three hour MahaEpisode “Jashn-E-Eid” of Qubool Hai scheduled on the 10th of August 2013 from 6:00 PM to 9:00 PM IST and also witness Bollywood singer Javed Ali mesmerizing with his magical voice this ‘EID’.

Here’s Wishing Eid Mubarak To All Our Readers!