Ravi Dubey is one actor who is not just a master of his craft but also an intelligent and positive person. He has not only managed to carve a niche in the Indian Telly space for himself but he also continues to be a positive inspiration and he along with wife Sargun Mehta continue to give us major couple goals.

The talented actor is all set to host Sa Re Ga Ma Pa Li’l Champs and he recently became a producer for a Punjabi movie called Kala Shah Kala. We caught up with the actor to know the journey so far and how it feels to step into this new role.

The success of the movie and also the fact that I have become a producer, the entire credit goes to Sargun [ his wife Sargun Mehta]. It is because of her credibility that we could breakthrough with this, I could breakthrough with this. It is her credibility that has not only made me producer, but also has made me the producer of a very successful film. So like everything else in my life, I owe this also to her. It has been a wonderful, wonderful journey.

I have not only been a part of this space in just the acting sphere but also been a consumer to great scripts by the medium of television. I think everybody who has been in the creative field has an inherent latent desire that I want to give the words, the scripts that I believe in, so I’m lucky that that opportunity has come my way. And, you know the success of the movie has given us a lot of validation on what we all believe in.

Q) Is production something you envisioned of doing at some point in your life?

Yes, it has obviously happen now, but many years back also, I felt that when I do get that kind of opportunity and I do have that kind of standing in the industry, I would, put forth my ideas.

But here in terms of choosing the script, there was zero involvement from my side, because Sargun was very convinced of the script, she literally just came and said, that we are doing this. It was entirely her vision and this is also the first film with which Zee Studios has entered into the Punjab market. So that in itself is a very big thing.

Q) So now that this has been done, what can we expect from both of you in the coming months?

So the next thing I cant really talk in this interview but soon, maybe within the next month and half I will be talking about it.

Q) I read in a recent interview that you are making a conscious effort to stay away from TV soaps and concentrating on reality shows, so in 2019 can we expect something more from your side.

Yes, in 2019 also the focus will be on non fiction but there is something else also that you can look forward too. Will talk about it when the time is right. 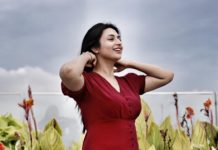