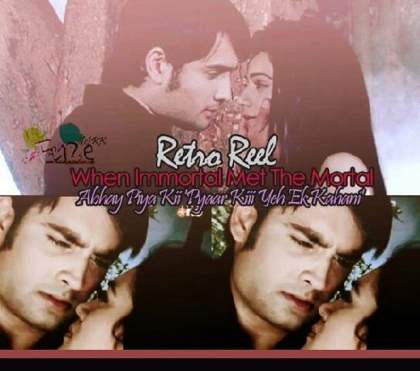 This is how the first Supernatural love story found its culmination on Indian small screens back in 2010 when a prey madly fell in love with her hunter. The inevitable and yet impossible love story which set the TV screens on fire was that of Abhay Raichand ‘The Vampire’ and Piya Jaiswal/Dobriyal ‘A Normal Girl Next Door’. Reading the names Abhay and Piya do I see the readers Abhay-Piya days and smiling. Keep the smile intact on your face and continue reading. This “RetroReel” is all about when the immortal Abhay met the mortal Piya, sparks flew and thus began Abhay and Piya’s ‘Pyaar Kii Yeh Ek Kahani’.

Pyaar Kii Yeh Ek Kahani produced by Balaji Telefilms , marked the beginning of a new, different, unique and a fresh love story on the Indian television screens. The American television has seen shows based on these lines, ‘The Vampire Diaries’ being the stand-out example but Pyaar Kii Ek Kahani was the first of its kind on the Indian Television platform. Apt to the title of the show ‘Pyaar Kii Yeh Ek Kahani’, Abhay Raichand and Piya Jaiswal came face to face and the heart knew no boundaries, surpassing the hindrance of one being an Immortal and the other being a Mortal, Abhay and Piya found love and their love was sure ‘Immortalized’.

Set up in the Mount College campus in the city of Dehradun, this love story surely had different horizons to meet. Abhay Raichand, the arrogant, rude, egoistic and yet the Golden Hearted Vampire fell for the soft and gentle human girl, Piya. Ignorance of feelings later became a denial of love. While juggling to keep the secrets of his mysterious world from Piya, he clouded and created a thick veil near and around him that would protect his love from the unknown and obscure dangers that lured around his world. But, love finds its own ways. Abhay inspite of all his guarded insecurities had to bow down in front of the enduring love that was blooming in the heart of the human girl for him. Although, nature deprived him of possessing any heart, but the one beating heart between the two sufficed the need for both the two lovers.
Their love story did face every obstacle that was imposed on them by the Human and the Supernatural world. Starting from Vampires, Werewolves to the Human Legal and Social norms, they overcame every hurdle to become one.

Every time Abhay-Piya were apart due to the circumstances it was their love which brought them back together every single time. With the song ‘Dil Ibadat Kar Raha Hai’ from the movie Tum Mile, the viewers could not help but groove to the music, sing the song along and get lost in the fantasy world where a girl next door Piya Jaiswal/Dobriyal had found her perfect prince charming in a Vampire Abhay Raichand and Pyaar Kii Yeh Ek Kahani depicted the lives of these two from the time they met to when Piya got married to Abhay, Abhay became Human. The show was all about love, being with your love and winning in love leaving behind all the hindrances, even if it was of being Mortal and Immortal.

Actor Vivian Dsena whose is currently seen in Nautanki Films’ Madhubala Ek Ishq Ek Junoon on Colors Viacom 18 played the character of the handsome, suave, strict, never smiling Vampire Abhay Raichand. Actress Sukriti Kandapal who was earlier seen in shows like Cinevistaas’ Dill Mill Gayye and who is currently doing Siddhant Cinevision’s ‘Kaisa Ye Ishq Hai..Ajab Sa Risk Hai’ on Life OK played the character of the sweet, simple, girl next door Piya Jaiwal/ Dobriyal. This love story of the Prince and Princess where the Princess found her Prince in a Vampire was no less than supernatural romanticized fairy-tale. The more Abhay melted to Piya’s innocence the more the viewers fell in love with Abhay and Piya. Vivian and Sukriti did a commendable job and with their perfect portrayal of characters.

Pyaar Kii Yeh Ek Kahani ended on December 15th 2011 after a successful run of one year and 2 months since the channel Star One was going in for a complete revamp and paving way for a brand new channel Life OK. The fans of this show were left disheartened and heart-broken. Currently it is the year of 2013 and even today the ardent fans of the show, the ardent fans of Abhay-Piya on-screen pairing hope that their favourite show ‘Pyaar Kii Yeh Ek Kahani’ comes back with a season two with the same actors and characters Vivian Dsena as Abhay Raichand and Sukriti Kandpal as Piya Abhay Raichand. With this we can estimate the fan-following and love the audiences had for the show and for Abhay-Piya.

Their Love is immortal in the hearts of a thousand and we hope that it will stay intact in the years to come. Signing off with the wish that Indian Television would soon witness another passionate Supernatural story again sooner or later.