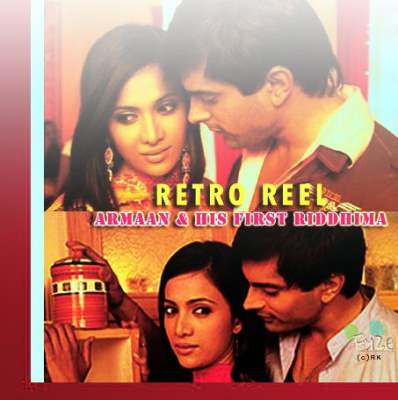 The tendency which the Indian television industry follows is very simple. A new serial, whether a daily or weekly drama/reality serial is introduced with the purpose of entertaining the audiences. When new serials arrive on the small screen, it is a known and well ascertained that they will give rise to new pairings and new love stories on-screen. With every new drama comes a fresh brand new reel love story and among these love stories, some stay with the audiences forever. Going down the memory lane to August 2007 Cinevistaas’s Dill Mill Gayye created one such memorable on-screen pairing with Armaan Malik (Karan Singh Grover) and Ridhimma Gupta (Shilpa Anand). Their on-screen pairing was a instant hit with the audiences and till this day this pair continues to have great number of fan-following.

While on one hand Ridhimma had a strict yet loving and protective father, an elder sister and was surrounded by well-wishers, her life was just a normal without a prince charming. To jazz up Riddhima’s life, enters Armaan Malik! He walked into Ridhimma Gupta’s life as a complete stranger, only to become her Prince Charming as he transforms Ridhimma’s life into a fairy-tale which had its share of good and bad.

The story of Armaan and Ridhimma was presented as such that the viewers could not help, but live with the characters. When either of two were hurt the audience used to feel hurt, when they used to shed tears the audiences wept along with them. When Armaan Ridhimma fell in love the audiences could not help, but hum the romantic track from the show ‘Asmani Rang Ho Pyaar Kii Bhoond Ho’. From the time when the show started Armaan and Ridhimma love story was beautifully and impeccably woven with actors Karan Singh Grover and Shilpa Anand. Armaan and Ridhimma’s love was as pure as the white untouched pearl from the depths of the deep blue sea. Actors Karan Singh Grover and Shilpa Anand with their perfect portrayal of Armaan and Ridhimma always left the viewers wanting for more. They played their parts on-screen to perfection and made the characters come out alive when it was time for ‘Lights, Camera and Action’.

From being strangers who met at the basket ball court and who challenge each other, Armaan Ridhimma go on to be working together at the same hospital. They gradually become friends to lovers. Armaan Ridhimma’s love story was never a smooth sail. They had their fair bits of disagreements, while their love and relationship had it’s share of reluctance, but at the end of the day it was Armaan and Ridhimma’s devotion, dedication and love for each other which kept them strong and kept them going.

However the ardent viewers who loved ‘Armaan and his very first Ridhimma’s pair; ie; Karan Singh Grover and Shilpa Anand’s pair, till date wish and hope that their favorite pair comes together on the small screen. In the year of 2010 Shilpa was brought back in the show as a whole new character Dr. Shilpa Malhotra. The fans of this pair were over-joyed but Shilpa’s character was a part of the show only for a little while. The charm, chemistry of this couple on-screen simply sets the screen on fire and Karan and Shilpa’s fans, who are named ‘KASH’ fans hope that their favorite pair is paired together on-screen yet again. Where they can create magic with their oodles of chemistry.

Armaan and Ridhimma’s love story had and has the capability to transport one in a dream world. Their love story is still adored and cherished among one of the most remembered on-screen love stories. They are truly magical and one cannot forget them. There say ‘Out Of Sight, Out Of Mind’, but in the case of Armaan and Ridhimma’s characters portrayed by Karan Singh Grover and Shilpa Anand, their on-screen love story and aura of romance they added on-screen is still remembered.

The fans of the on-screen couple hope that Karan and Shilpa are paired again in another show. We are not sure if this will happen, but we wish the fans good luck and also we would like to convey our good wishes to the actors for their future endeavors!!!!