Fuzion Productions Fuzion Productions is your destination for news on Indian TV, Web Series, Movies, Celebs, Fashion, Beauty and more.
Home ENTERTAINMENT EDITOR'S PICK Salman Khan : A Host Who Comes As A Ghost for the... 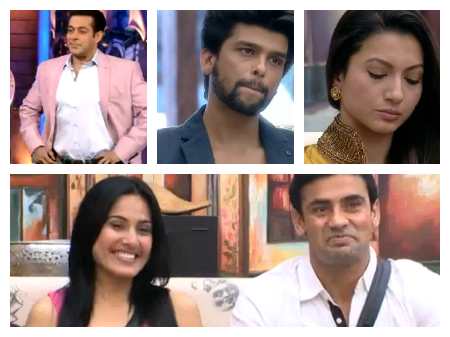 Salman Khan is one of the big brand names that is associated with Bigg Boss since four seasons. While his presence in the show has always helped it to add feathers on the cap, this season, he is only inviting controversies and backlashes through his over the top comments about certain contestants.

A respected producer from Bollywood (whom many people didn’t know before this) comes to a reality show like Bigg Boss and calls Kushal Tandon and Ajaz Khan to be Gauhar Khan’s ‘puppets’. He further said that Gauhar holds the remote control of these two guys. This results into a big fight between Kushal and Gauhar and also rages their fans, who took it to Twitter to criticise Sachin Joshi’s comments. Kushal and Ajaz too called him ‘dedh footiya’ in the show while being angry
on Joshi.

But Salman Khan finds the ‘puppet’ comment to be Sachin’s opinion only. Calling someone ‘puppet’ on National Television is just about expressing your opinion (which anyone can do) but calling someone ‘dedh footiya’ is insulting (as per Salman Khan). Looks like our dearest host has separate rules for different people. Ajaz has also been threatened that if he wants be an actor later, he should not call names to ‘powerful’ people like Sachin Joshi as it might go against his career.

As if the present one isn’t existing there at all, Mr. Host starts blabbering about her Ex. Half the audience would not even know who her Ex boyfriend is but Salman Khan is hereby busy promoting Gauhar Khan’s Ex-Boyrfriend as a very good man.

Someone should tell the Bigg Boss team that this season is extremely derogatory and has failed grossly in respecting women. Women have been insulted and targetted in this season repeatedly by talks or by action (name calling, pulling up their pasts, demonstrating their personal stuffs, shouting at them, physically getting hurt), but the trend continues in the season non-stop.

Salman Khan, please get the facts sir, it is not a very gentleman attitude to cross question a girl about issues that doesn’t require to be at public front.

In the show Kushal admitted once to Gauhar, that his dad asks people within his friend circle to vote for his son (as if no one else does that and it is something unnatural to do), Salman Khan picked up this line and charged at Kushal claiming that he got the highest number of votes as his father is lobbying for him from his hometown Lucknow. Kushal got upset about the fact and said that his words are getting twisted. Salman kept on urging on the fact that Kushal gets votes at a nerving rate because of his father whereas other contestants don’t (may be because their fathers don’t try). Hence people should vote for others as well.

It is very weird when people shout loud about Salman Khan and Shahrukh Khan’s enmity, we find Salim Khan (Salman Khan’s Father) still coming out at this age and giving out statements about his son’s rapport with Shahrukh ( He said recently, “Salman and Shahrukh can never be friends”). Moral of the story is, every father does something or the other for the sake of their child. But no father can bring 3 to 4 million votes if public genuinely isn’t voting for the concerned person.

This week the chances of eviction for Kushal Tandon was high, and the insecurity among his fans urged them to vote more than the other weeks. He is at the 9th position at the Eastern Eye Sexy List. Does Mr. Host want to claim that all these votes are been sent by his father? Moreover, Kushal Tandon is also ranking at 5th position at the ongoing Fuze Television Personality Poll and trust us, we didn’t get any votes from his father!

While every Saturday is a testing time for the contestants, some of them are always left out inspite of their arrogance and destructive behaviour and some of them keep facing the ‘Khan wrath’ for reasons unknown. On this note, we wish all the contestants a very good luck for the last coming 2 weeks.

P.S : – Oh and yes, this is seriously not a PR activity generated article. We are not in contact with any of the housemates’ PR (Just for clarification regarding Mr. Host’s doubts!)