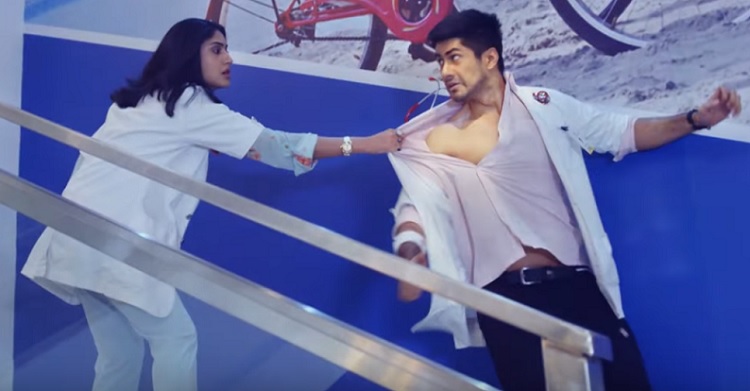 The promotions of the new upcoming show by Star Plus’ Sanjivani, are on full swing and the much awaited promo giving an insight into its first episode is out.

The promo showcases Namit Khanna aka Dr. Siddhant going shirtless (not for you to drool over ladies!) to save a boy drowning in the river. What follows is a commotion and the tit bits of the scene from which it can be made out that this doctor knows pretty well the disparity in the medical treatments given to the poor and rich and hence he does something out of the way to help the boy, which for now can be termed as per him as ‘jugaad’. Rapid fixation we must say!

The next shots are of Dr. Ishani aka Surbhi Chandna and her tiff with this doctor whom she records taking a bribe. Now this lovely medico is fiery and from the looks of it has a completely different understanding of who Dr. Siddhant is.

She isn’t the one to sit back and take it all quietly, rather she warns him in a deadly tone and even confronts the authority of the hospital about having caught hold of a person who’s apparently tarnishing ‘Sanjivani’s image! Much to get dismay she only witnesses a smirking Dr. Sid when the authority person turns around!

What we liked in the promo is that it’s nothing 100% goody two shoes.

The show has some fiery elements. From what we can fathom about the subject created, it for sure includes the subjects that are a concern in the public healthcare sector right now.
From how one of the doctors is fighting her way to curb the corruption or raise a voice against it at least, showcases another prominent angle which is being less talked about or focused on.
For the creator, the makers have done some amazing work it seems from the sets of the show to glimpses of the hospital chauffeur we’ve got to witness. To watch their creation unfurl a little more and witness it in full strength we are still waiting for the episode!

Talking about the characters, this was the very first impression of the characters (only two though ) of the show. The two don’t seem to have any romantic tashan between them but rather a totally different polarity phenomenon between them. They are two separate individuals who are headstrong and adhere to their own mindsets.

While Dr. Ishani would seem very righteous, ferocious and the stricter one and Dr. Siddhant may seem like a more mature about the tactics, someone like a dark horse of the game right now but what’s interesting is the same fact that this doesn’t give the appropriate image of the characters and how they are in true sense.

The entire promo leaves a lot to be explored in terms of storyline, discovering the making and getting to know how and why these characters are so. For now, it leaves a good unsettling symptom inside, which would only vanish when we get to scan the episodes from our very own eyes starting from 12tg August, 7:30 pm onwards.

For now this is the only medical history of the patient (aka the show ) you have. Any further diagnosis would be updated! Adios!