Home ENTERTAINMENT EDITOR'S PICK Shaheer Sheikh And Rhea Sharma Are Breaking The Stereotypes With Their Power... 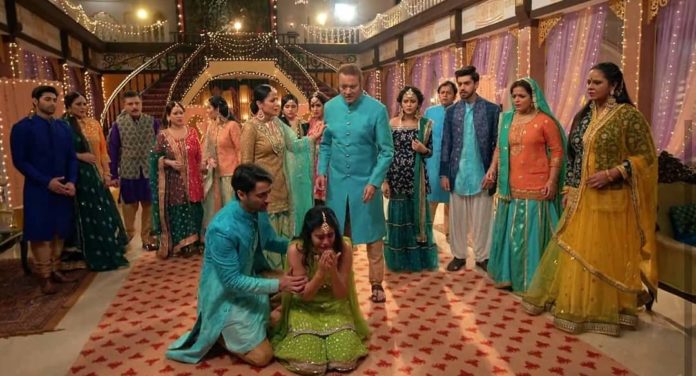 As a part of the Indian society, none of us is oblivious to the demons that exist freely amidst us. The patriarchal society that we live in comes with a pedestal of the labels to be followed by the women from a very young age.

It’s indeed no less than a privilege to be a female who hasn’t been subjected to crude remarks, judgement, being called names ever. And while that topic can take far more than 100 pages to sum up the problem and its origin, we’re today focusing on the fact that one of the major issues is being taken up and worked upon to make an impact on the viewers by an Indian television show.

This time the writers of the popular Star Plus show Yeh Rishtey Hain Pyaar Ke deserve a special appreciation for weaving a story that will tug at your heartstrings, the actors of the show who deserve all the applause for establishing an emotional connect to the viewers and making it all relatable.

Special mention goes out to today’s episode which has left the viewers and fans of the show teary eyed and once again in all awe of the performances delivered by Shaheer Sheikh and Rhea Sharma as Abir and Mishti respectively.

As known to everyone , the current track revolves around Mishti, who apparently has killed Varun’s brother, Karan in self defense while the former was trying to molest her. She had been suffering from the guilt ever since and PTSD has engulfed every ounce of the courage that Abir’s ‘angry chorni’ possessed.

Today’s episode showcased the intense and much awaited drama and the confession by Mishbir that shook the ground beneath everyone’s feet . What accompanied it wasn’t only the shock but Abir’s outburst and the torment that the two suffered all this while .

1. It was Abir who was Mishti’s rope of hope in true sense. He kept her glued, he was the one who instilled strength in her and kept the angry chorni inside her from vanishing. At the same time, it was Abir today, who drove Mishti to the point of confession. If he was the one keeping her at bay, then he was the pride Mishti could never bear being fading away. Everything was tolerable to her but the sole visual of her pride bowing down wasn’t something she could ever accept. As she said, Abir was her sky and he was always supposed to be the one guarding and shading them.
And as Kunal once said, Mishti was even a tougher one when it came to protecting Abir, more than himself!

2. Abir’s outburst today was the embodiment of all that many of us Harbor inside. For a few that rejection, the fear of being judged, the lack of understanding that comes later from the world but firstly from within the family and all the taunts gradually take the shape of venom that at times engulf the individual itself. For Abir, the trauma had been no less. Considering how sensitive he has always been as an individual towards every being’s feeling, he was equally affected by the events that transpired with Mishti in last three months. His soulmate, as he truly was, his heart always ached at the sight of her beloved suffering each day.

The way Shaheer Sheikh aptly conversed through his expressions and body today made it more impactful with the voice. It seemed like it indeed was all that we wanted to convey a a viewer who had been deeply frustrated and angered by all the blame game that was being thrown at Mishti all this while.

3. Mishti’s outburst of all the pent up feelings could bring anyone close to tears with the way Rhea Sharma once again compelled the viewers to ponder upon and dwell deeper into her sufferings. It was like a dam broken open. For Mishti, this nightmare brought back all the miseries of her past. The pages from the book that she closed with great difficulty. It was taking the breath out of the strong willed Mishti who learnt to always ignore the accusations thrown at her. This time it was heartbreaking to see the brown belt angry chorni melting into a someone so vulnerable and fragile. The way she struggled to keep the relationships intact even today showed the side of her that’s still waiting to get accepted and loved by the rest of the family like Abir, her Badi Maa and Bade Papa.

4. The way Abir and Mishti were each other’s constant support throughout the entire confession would break anyone’s heart at the sight of two actors portraying the emotions so marvelously. There wasn’t a single moment when Mishti would forget to utter Abir’s name for the support she received and for the collateral damage that he suffered because of her. The way the two speak through their eyes came out as the biggest pros of having Shaheer and Rhea opposite each other. The two seem to have an innate potential of driving the viewers to the brink of it.

Breaking the stereotypes, the show today raised the valid concerns of the society. From victim shaming to receiving little support from the family and let going of the accused, the issues raised in the show since a last few days and today deserved quite a hype through promos and it could have served the purpose of more reach.

At times when still talking about all these things comes across as a taboo for the families, the show coming up with such notions to change a common man’s perspective shouldn’t go unappreciated.

It wouldn’t be an exaggeration to mention again that Shaheer Sheikh and Rhea Sharma stole the thunder yet again for their outstanding execution and we couldn’t be more thankful for having these two to give out a message as sensitive as this.

Here’s wishing the channel promotes such shows and the content in a way that it deserves.