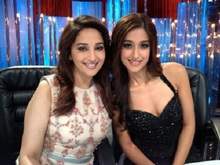 Shahid Kapoor and Ileana D’curz will be seen on Jhalak this weekend for the promotion of their upcoming flick ‘Phata Poster Nikla Hero’ directed by Rajkumar Santoshi (popular for Ajab Prem ki Gazab Kahani).

Shahid after a long time will be seen on reality show promoting his movie. He was seen last time during ‘Teri Meri Kahani’. This is the first time Ileana and Shahid are paired together. This would be Ileana’s second film after ‘Barfi!’
Madhuri Dixit posted a pic of her’s and Ileana on her social networking account. Madhuri one of the judges of Jhalak seems pretty excited to meet the celebrities coming for promotions and loves to spend time with them. Shahid being a dancer, we may get to see him dancing more on the Jhalak floor with all the lovely ladies(contestants) out there.

“Phata Poster….” Is scheduled to release on 20th September 2013 in India, directed by Rajkumar Santoshi and Produced by UTVs.