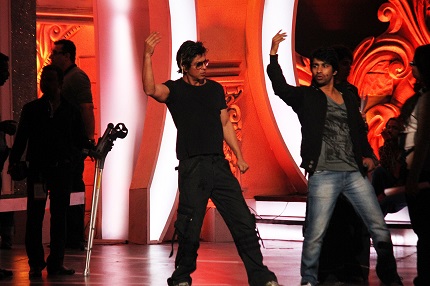 The baadshah of Bollywood, Shahrukh Khan is not only amazing at acting, but also now is coming up with ideas of performances. Shahrukh will be doing a special performance in this year’s Zee Cine Awards. He had hosted the award show earlier as well.

(Also Read : Highlight Of The Day : Salman and Shahrukh Embrace At the Star Guild Awards 2014)

The hosts of the Zee Cine Awards are Abhishek Bachchan, Ritesh Deshmukh and Manish Paul. Abhishek and Ritesh had the audience cracking up with their humor, especially the self-depreciating kind.

(Also Read : It Is A Wrap Of Dubai Schedule For Happy New Year!)

The special performance includes magic. Shahrukh Khan will be seen turning a stick into a rose producing handkerchiefs out of nowhere. Along with the magic, Shahrukh also will be introducing the nominations for the best movie.

Shahrukh is definitely an entertainer and an energetic one at that. He also does the Lungi Dance despite the fact that he was injured on the sets of his upcoming film, Happy New Year.

(Also Read : Bollywood And Television – One Fails Another Succeeds And Vice Versa!

With each introduction, Shahrukh enacts a spoof of the film which will definitely make you laugh. It had the audience in splits. They just could not stop laughing. Comedian Bharti Singh also joins him for a couple of them.

Akshay Kumar and Deepika Padukone will perform as well. Reportedly, Deepika’s performance will end with Ranveer joining her on stage, probably to one of the songs from their hit film, Goliyon Ka Rasleela Ram-Leela.

The Zee Cine Awards 2014 was held at Reliance Studios in Film City on February 8th. It will air on February 23rd.

Are you looking forward to the award show? Whose performance are you most excited for? Let us know in the comment section below and stay tuned to Fuze!