The picture of Sonam Kapoor went viral on internet today as soon as it got leaked. While you might be thinking what’s wrong with Sonam, let us correct you.

Sonam posed with shaving cream and razor in front of the camera for a photoshoot that she did for photographer Rohan Shrestha. With her messy hair and unkempt look, Sonal looks exceptional in the photo.

While Sonam Kapoor is regarded as the fashionista in the industry, such a pole-apart photoshoot was certainly not expected from her. Other than being the fashion diva (like she is always), this time Sonam chose to come up in this rather disheveled appearance.

Anil Kapoor was famous during his youth days for his ‘hairy’ appearance. Inspite of the trend of all non-hairy heroes, Anil Kapoor never shaved his beard or his body. Hence, the leak of Sonam’s picture invited the hillarious jokes on her father that might for sure crack you up big time. However, some people also did cross lines while cracking jokes and all we can say is these are just the negative side of social media. 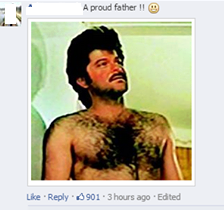