Home ENTERTAINMENT CELEBRITIES Surbhi Chandna Urges The Fans To Wait For The Episodes Of Sanjivani... 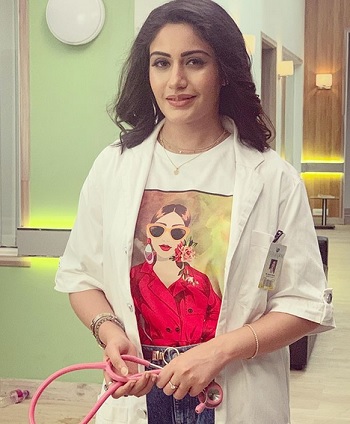 The time is near for the third season of the iconic show Sanjivani to go on board. Sanjivani starring Namit Khanna and Surbhi Chandna as a fresh pair, the show retains the cult performers like Mohnish Bahl and Gurdeep Kohli with addition of another amazing actor Rohit Roy.

While the promotions for the show are at its peak as it nears, the new episodic promo released has everyone talking about it already! The viewers are analysing the promo to their abilities and the promo review we’ve given will surely give you a reason to look forward to the show.

But nonetheless, netizens who have never shied away to voice their opinions in seconds are out expressing their views on the promo. However a few feedback seem to be too concluding at the moment.

Responding to such tweets, the actress Surbhi Chandna, who plays Dr. Ishani in the show has urged the fans to not be quick to make any judgments yet.

She has requested them to wait for the episodes to air and give time to understand the characters too.

Well that sounds fair enough for the show deserves a fair chance to present itself before the public gives it’s verdict.

Here’s the conversation that followed the responses today –

Being a fan of her,im not going to praise her. Her dialogue
" bandhe ki complain" is exactly like annika or i'll say more of SC's real life talking style which needs to get removed. It's kinda loud.Hope u'll take it as positive critisism @SurbhiChandna https://t.co/kxUQklymc5

For everyone judging the characters and performances after release of the promo.. guys its too soon .. its an entire graph of a character along with their backdrops and backstory.. let us wait for 12th and enjoy the show ♥️#sanjivani