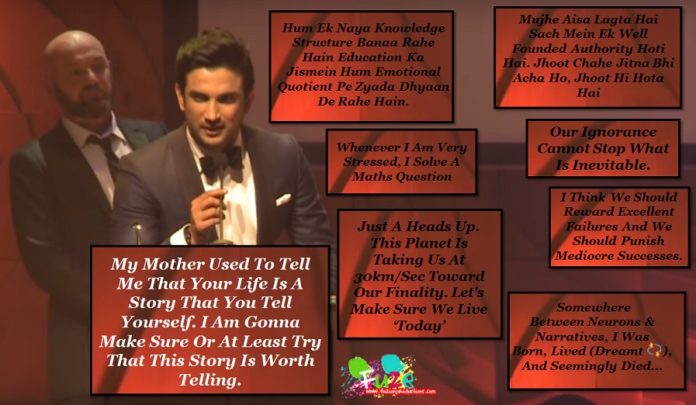 Sushant Singh Rajput – The man owning this name is no more among us. But whatever he has said, expressed on and off screen and wrote in his lifetime shall remain with us for time immemorial. He was not only an actor, he was a sports enthusiast, an educationist, an aspiring astronomer and pilot who also owned a Boeing 737 Fixed Base Flight Simulator, a physicist, a painter, a philosopher, a writer, a guitarist, a dancer. He was ambidextrous, could write with both his hands and even play cricket both ways. His 37th dream included his aim to become an ambidextrous archer. He was a coder, an entrepreneur, an engineer without a degree because he engineered dreams.

Ask us and we would say he was the Leonardo Da Vinci of today’s era. He has said things that are relevant in today’s time in the field of art, science, education, sports and life in general. And those will remain relevant in the next 5 decades or more.

Our intention in gathering and assembling these quotes in one place is simple – To let people get to know him better and not miss out on words of wisdom. He has given hundreds of interviews and spoken a lot in them whenever he was asked good questions. He loved good questions and always came up with insightful answers to those. As may be at times, people may miss watching the best of his lines or saying from these interviews, we have simply gathered all the significant sayings of his here giving credit to the main interviewing platform so that anyone who wants to watch the whole interview can find it on internet to watch it.

We have simply picked up 60 of his such quotes that gives a thorough insight to his mind, thoughts and his persona. He was a reader and a thinker. He loved math and physics and he knew how to amalgamate his love for science with his passion for art. He even believed that the road to truth can be crossed either through science or through faith. He talked about changes that are required in India’s education policy that thankfully after his demise we can see being implemented through the National Education policy. Sushant was futuristic too.

We have also picked up 40 of his selfmusing quotes that he himself wrote in his various social media platforms including Facebook, Twitter and Instagram. These quotes together form the powerful 100 sayings by him.

We feel that we should listen to him often, as often as we can. We should remind us of his words as often as we can. We should keep telling ourselves that yes, there was a hero, who knew the science and art of life. He knew how to live, how to dream and he taught his admirers the same. Sushant has multiple times repeated and reconstructed this quote of James Dean that he wanted to implement in his life – “Being a good actor isn’t easy. Being a good human is even harder. I want to be both before I am done”. Today definitely India knows and believes that he was both.

Below is the gallery of top 60 quotes of Sushant followed by 40 selfmusings in the next gallery. You can also scroll down the galleries and find videos of some of his finest interviews embedded in the page. Read them or watch them, but do listen to him quite often, as often as you can. His words are enlightening.

WATCH SOME OF HIS BEST INTERVIEWS BELOW :