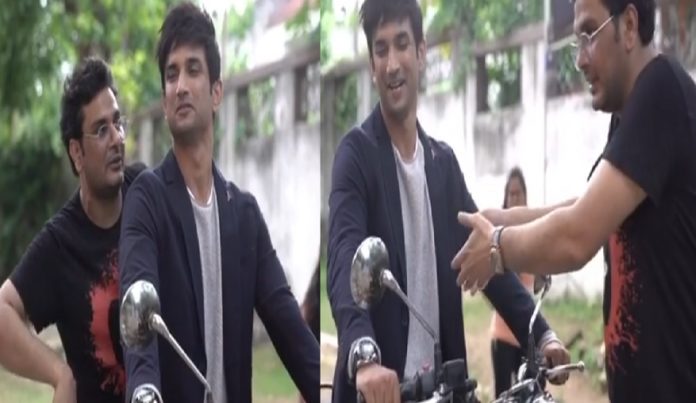 Sushant Singh Rajput‘s last film Dil Bechara is going to release on the OTT platform of Disney+ Hotstar on July 24th 2020. The trailer and the title track of the movie is already released and have created record number of likes and views on YouTube. As per some reports, the trailer has become the fastest video in the world to receive 1 million likes.

Now today, another beautiful song ‘Taare Ginn’ is all set to be released by the makers. Taare Ginn’s video will be released on YouTube and director Mukesh Chhabra shared this BTS moment from the set of Dil Bechara.

This is probably one of the sweetest BTS moments from Dil Bechara shoot that will instantly bring a smile on your face. It seems like Sushant is already Manny and so much into the character even when the ‘action’ mode is really not on. His expressions say that he is already feeling the song and has been effortless in bringing the emotions on screen.

His excitement while narrating his actions to Mukesh Chhabra itself is contagious – ‘Usne aise kiya to maine yeh kiya, usne pakda, to maine aise kiya, uske baad…main phir se….’, his words will make you fall in love with the actor more.

The making of the song is so innocent, we wonder how the picturisation will be like.

The song composed by A R Rahman, has already all feels of a Disney love story. Dil Bechara’s trailer says it’s an ‘un-fairy’ love story but this song all along will give you the fairy tale vibe.

Watch out for the release of the song today. But until then, watch this video of Sushant while shooting for it.