Suspicious Partner – The 2017 K-drama starring Ji Chang Wook and Nam Ji Hyun is quite a hit among the internet audience. The show is available on YouTube to watch for free! It’s a package of entertainment.

And also it’s quite difficult to categorize the genre of Suspicious Partner, which is also translated as ‘Love In Trouble’. It’s a rom-com, it’s a legal thriller and also it’s a suspense thriller. You will get a bit of everything in the show with frequent laughter doses.

If you didn’t watch the drama already, we recommend you to watch it. You will surely have no regrets.

Here are our 15 best moments picks from Suspicious Partner.

Also Read: Ji Chang Wook : 5 Reasons Why Korean Drama Healer Is A Must Watch For You!

The drama opens with a classic disaster in the metro subway wherein Eun Bong Hui ends up blasting a man standing beside her under the false impression of him being a pervert. Ji Chang Wook’s flabbergasted expressions are the highlight of this scene. 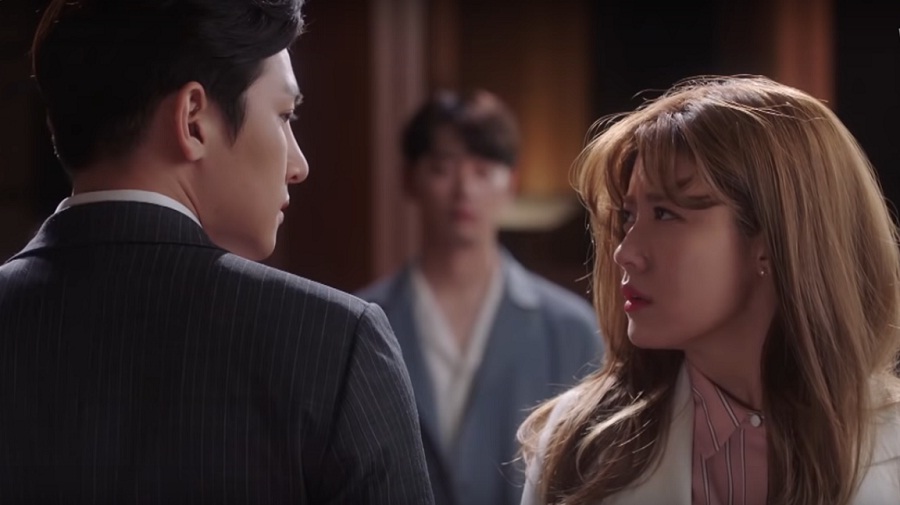 When you are cheated in a relationship, you are hurt. But when your partner is unapologetic about his deeds and instead casually asks you to expect such mishaps as he is ‘young’, it certainly makes you go crazy. Eun Bong Hui too went crazy and challenged her boyfriend that she too will first cheat and then break up with him.

She unintentionally runs into the man whom she had assumed to be a pervert at the subway. Somehow, he even agrees in front of her boyfriend for a one night stand with her (that was just for a show though!) and the crazy happenings post that turn out to be a hilarious roller coaster ride.

What happens if you encounter the same man as a respected and powerful senior prosecutor under whom you are supposed to undergo a compulsory legal training? Poor Eun Bong Hui ends up in a pitiful situation with Prosecutor Noh Ji Wook and the bickering of the two even in their office space would put you in a laughter riot. 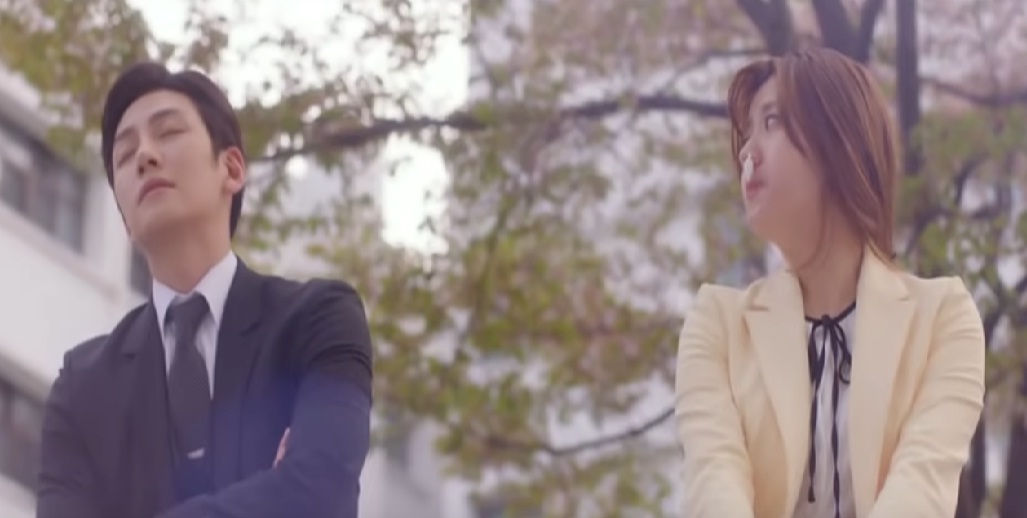 4.”You Are Dirty But Pretty”

Eun Bong Hee doesn’t take shower for days if she is stressed or sad. The scene wherein she is humiliated by her ex boyfriend but her boss Noh Ji Wook actually comes in between to compliment her saying ‘You’re dirty but pretty’, would make you laugh and at the same time go all ‘awww’. 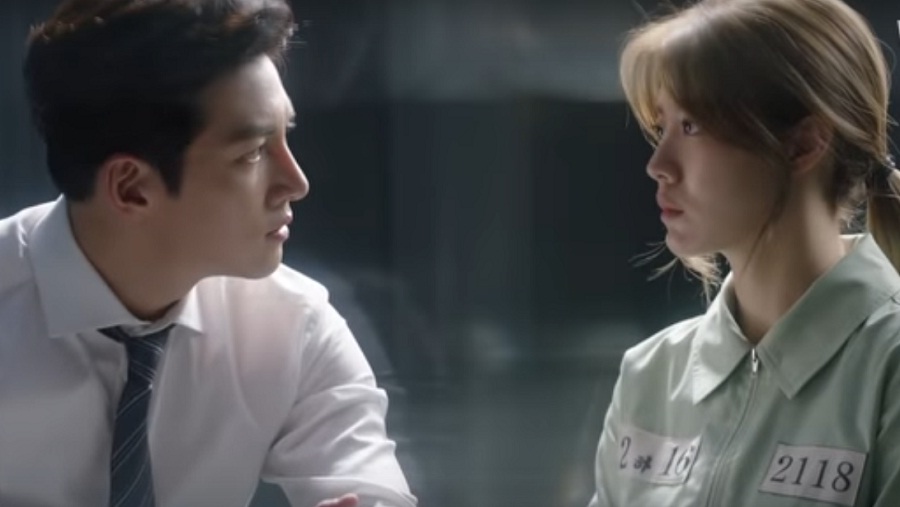 5.The Interrogation And Trial

Noh Ji Wook’s initial desperation to get a confession from Eun Bong Hee after she is arrested with the charge of murdering her ex-boyfriend but repeatedly failing to do so as she constantly kept saying that she trusts only him as her savior, would make the viewers sympathize with her and at the same time realize the changing relationship between the two.

Noh Ji Wook eventually realizes that she is innocent and his daring act to put his career on the line to save her not only would surprise everyone but even Noh Ji Wook didn’t know why he did what he did. 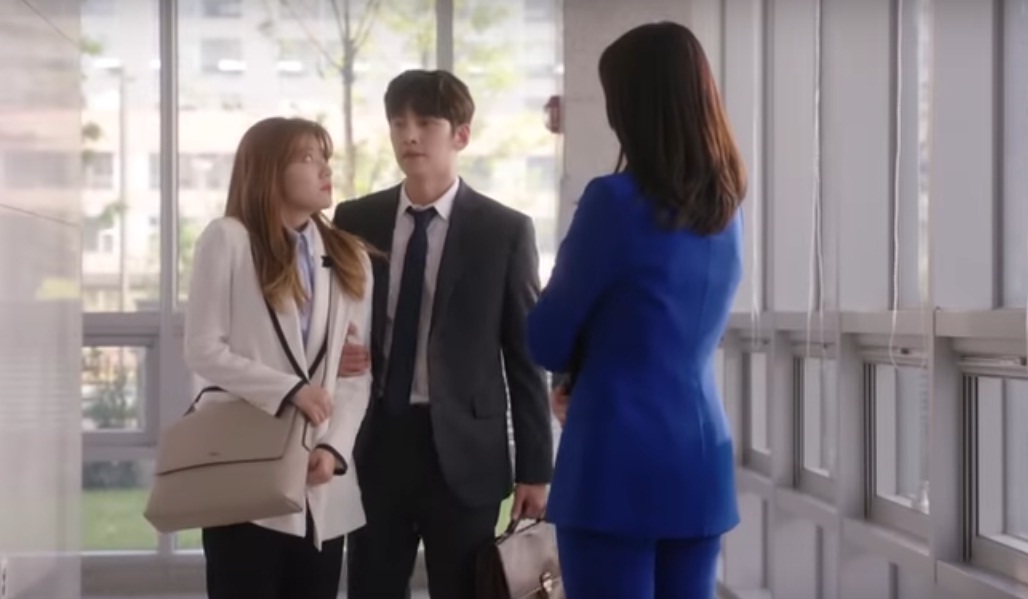 Every time Eun Bong Hee pretends to be Noh Ji Wook’s girl friend in front of his former girlfriend, the moments are hillarious and unforgettable. This one especially is a bookmark worthy moment when Noh Ji Wook too participates in the ‘acting’ inviting an awkwardly weird moment between them. 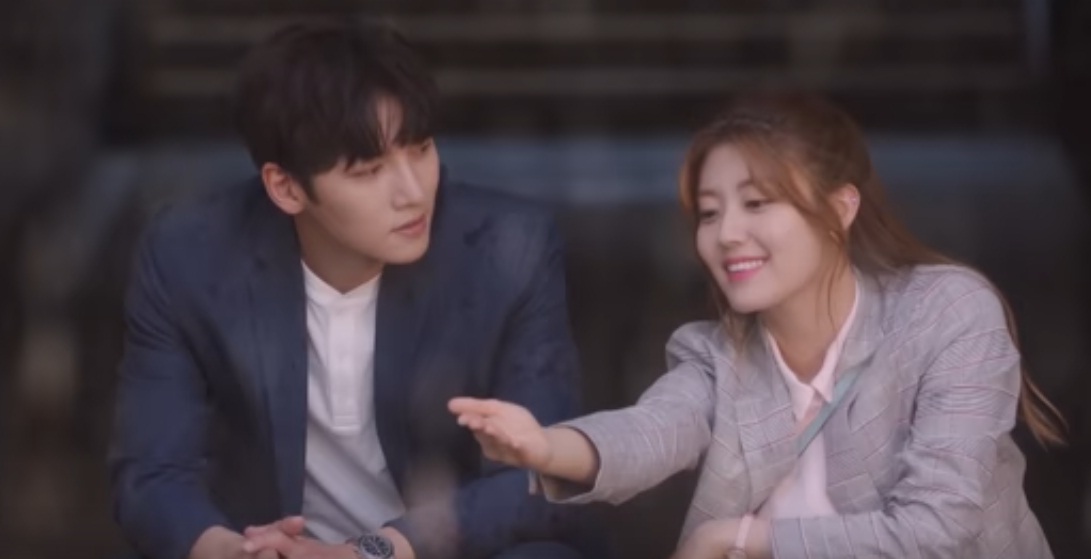 For a viewer who has watched this drama diligently or repeated number of times, this one would remain a special moment. Coming to think of it, this is probably the first time Noh Ji Wook realizes that he is falling for Eun Bong Hee. He doesn’t say it aloud, in fact probably he got scared at the prospect of falling in love (that’s why he rejects her later when she proposes him), however, this was his first rain and first realization of love for her. 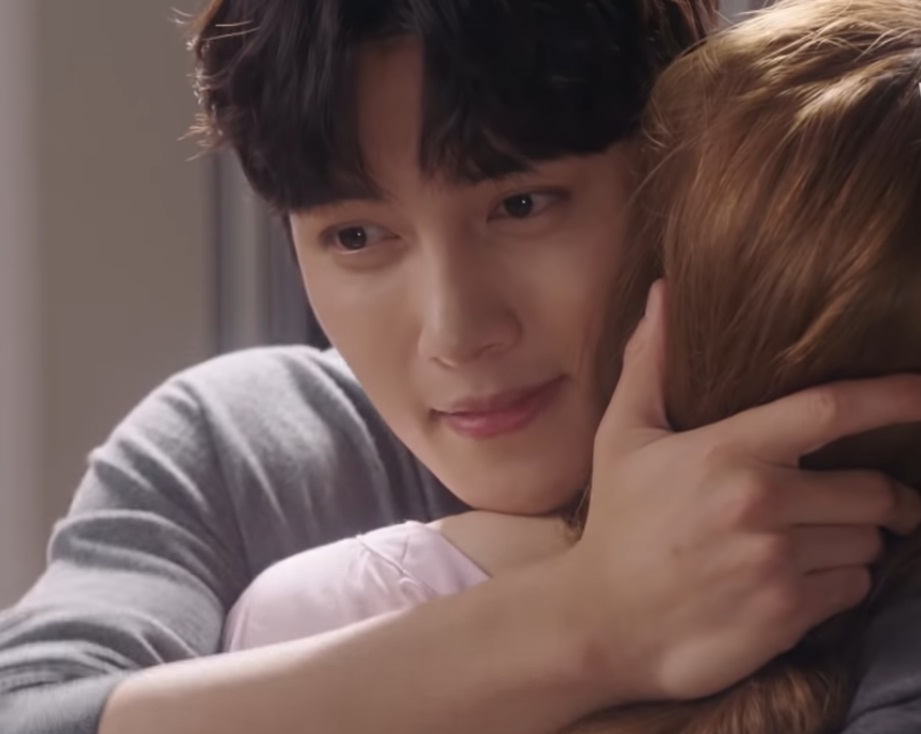 Appreciation for a wonderful job comes in many ways. But if the man whom you love, admire and respect as a senior appreciates your brilliant performance at work with a tight bear hug despite your hair being greasy and you smelling like a horse – That’s what you call real love, isn’t it? One must take a note of Noh Ji Wook’s expression in the scene after Eun Bong Hee cracks the case, he was indeed proud of her achievement! 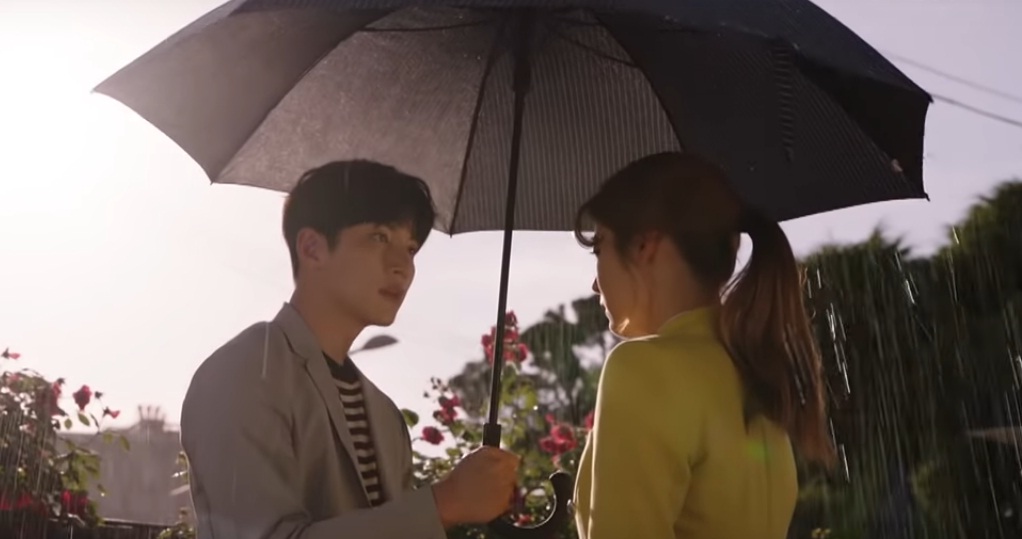 Eun Bong Hee’s fickle nature makes her take a hasty decision. On the day she was about to to say ‘yes’ to Ji Wook, she comes to know that the man she had made him defend in the court (Jung Hyun Soo), is actually the culprit of serial murder. And thus she decides to say ‘no’ to Noh Ji Wook. The reason of her doing so may sound really stupid, but yeah, that’s Eun Bong Hee.

But the best part of this entire fiasco was Noh Ji Wook understanding that something was wrong and also that he needed to give her time and space to arrange her thoughts. That’s one of the beauty of their relationship in the show.

Eun Bong Hee is really like a child at times, who needs an understanding guardian and Noh Ji Wook is actually quite good in playing that role in her life. This scene when he holds the umbrella upon her return back to their office and escorting her back, shows his unconditional understanding for her.

10.The Psychological Game With The Criminal

Noh Ji Wook’s encounters with Jung Hyun Soo (the criminal) at the hospital is an engaging scene. The challenging tones, the sarcastic attitude, the ‘catch me if you can’ kind of words, the suppressed anger – Everything would keep you on the edge of your seat. 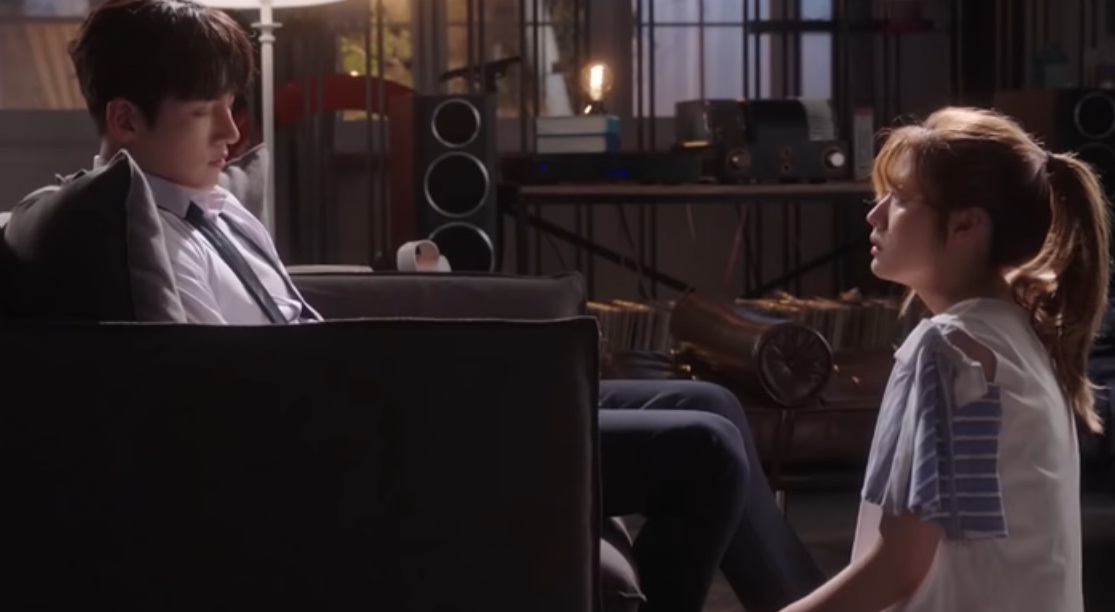 Noh Ji Wook suffers from acute insomnia. Most of the time he faces trouble in sleeping. However, if Eun Bong Hee is sitting nearby him, in presence of her he is able to sleep peacefully. And for Eun Bong Hee, a sleeping Noh Ji Wook is quite a beauty to admire. There are multiple such scenes wherein she sits for him to sleep and simply admires his sleeping face. These scenes would also be favorites of the ‘Suspicious Partner’ fans. 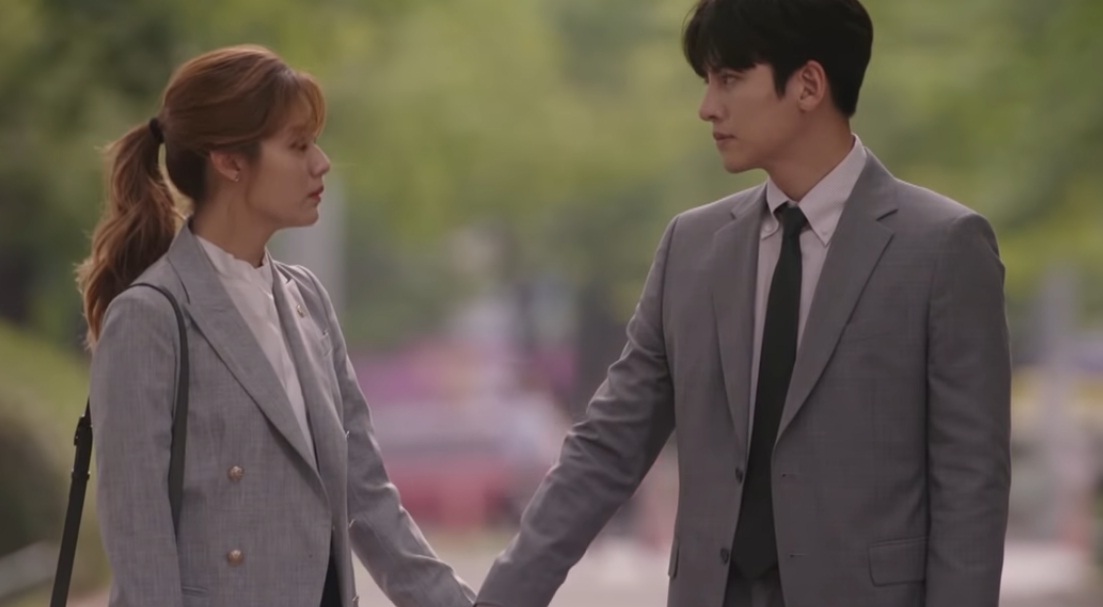 She comes to know that probably he thinks that her father is responsible for his parents’ death. Although he tried his best to keep it a secret from her. And being as fickle as Eun Bong Hee is, she again decides to break up with him.

The best part of this sequence is the way it happens. She delays the break up knowingly for hours. Eats with him, roams around with him, shots a video, enjoys an ice cream and then decides that delaying is a futile effort. Throughout his time with her probably Noh Ji Wook knows that she has guessed the truth but he plays along with her trying to understand what’s going on in her mind but never asking her aloud.

When she finally blurts out about ‘break up’, he just asks ‘When did you get to know?’. He showed no surprise. Their conversation is edgy in the scene and his denial to let her go made this it more special and memorable. 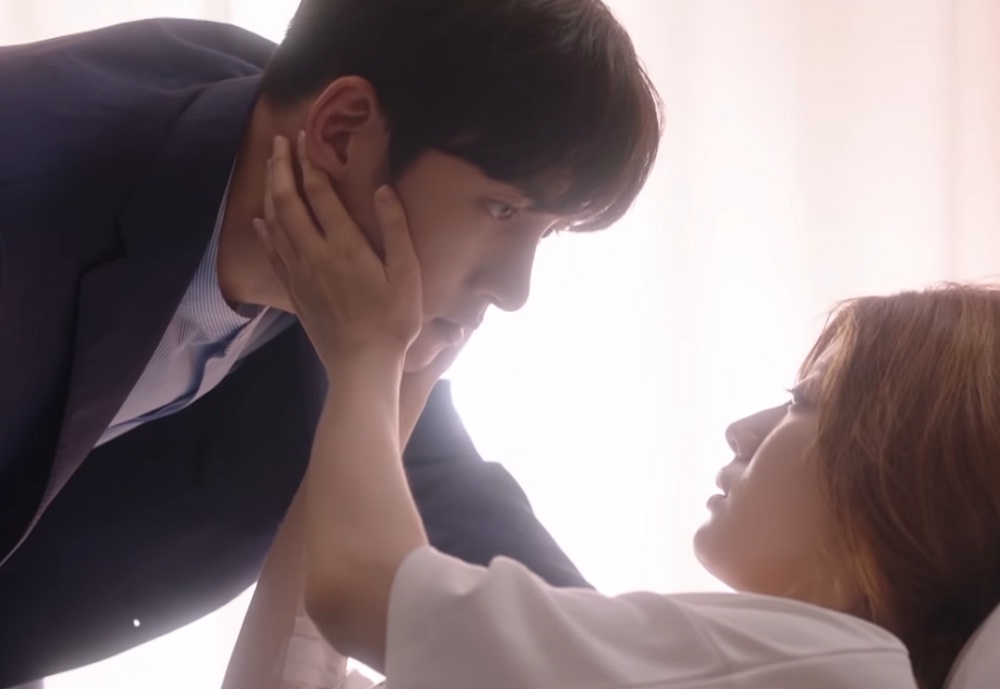 Eun Bong Hee thought it was a dream. Audience would stay confused about whether it was a dream or was it real until later it turns out to be something real!

After break up she lands up in hospital, half conscious. When Noh Ji Wook visits her, they share an intimate emotional moment. Eun Bong Hee thought it was all her dream. But Voila! She showed her real feelings in quite a raw manner to Noh Ji Wook, just 2 days after break up. The way the scene ends, it actually keeps you in a cliffhanger thinking whether it really was true or was it just a dream. 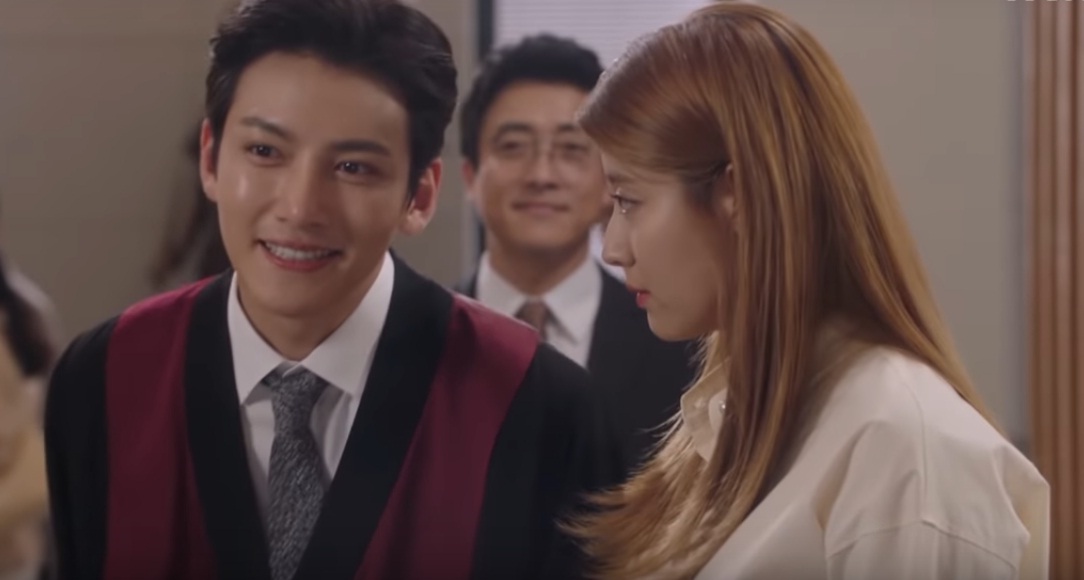 It’s a burden if you are assumed to have committed a crime. Eun Bong Hee was the victim of this assumption and she had to pat hefty prices in life for the same. The moment when finally the real criminal is punished by the law, she feels the burden of her heart lighten. But the most magical moment for her was when Noh Ji Wook wishes her the long awaited ‘congratulations’. He knew what it meant for her and she knew what he meant for her in her life. 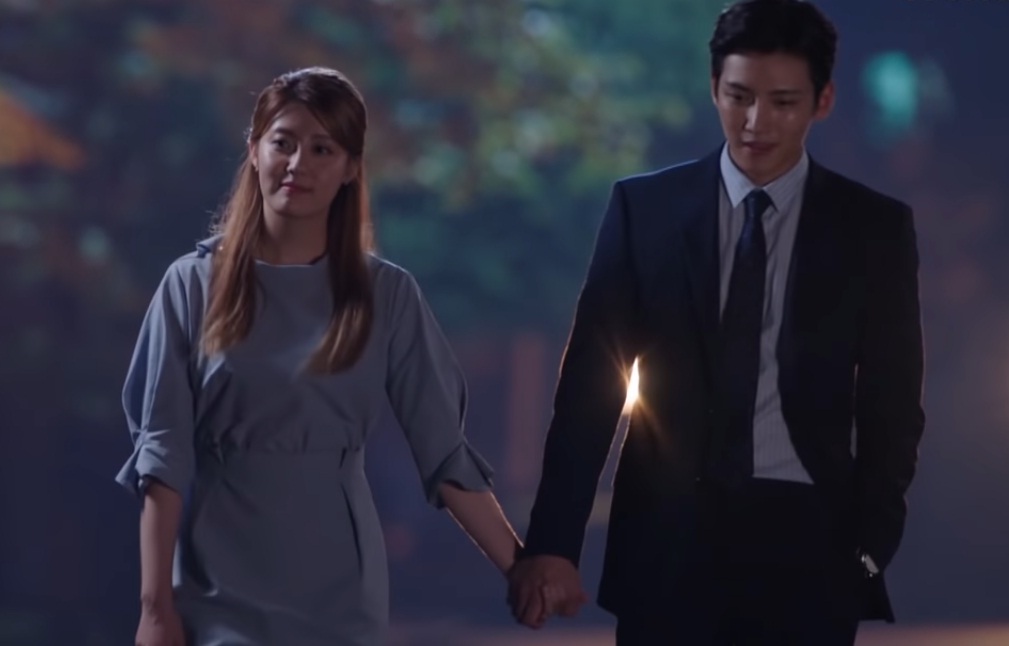 It’s a happy ending for the duo at the end. But the best part of the end shot was not his proposal or her yes. It was their taking every step together. Also, brownie points for Ji Chang Wook’s song in his own voice. This one scene would stay with you for a long time just for being the perfect ending.

Watch The Trailer of Suspicious Partner Below :