Home ENTERTAINMENT EDITOR'S PICK Swaying In The World Of Love….What Repercussions Will The Unfolding Mysteries Have... 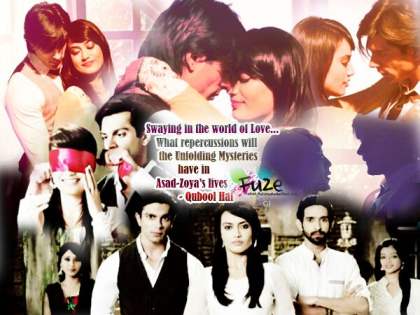 Change is a part and parcel of life. At times the changes in life are anticipated and at times they are unforeseen, come what may, these changes are inevitable. Sometimes certain changes bring a bout of awakening or gloominess prefixed or suffixed to it. Since changes are a way of the real life, even the characters on television go through various phases and changes in their character life.

The recent characters who are all set to see some unforeseen changes are none other than Asad Ahmed Khan (Karan Singh Grover) and Zoya Farooqui (Surbhi Jyoti), the characters from Zee Television’s (Zee TV) hit show Qubool Hai which is a venture of 4 Lions’ Films. As we mentioned earlier, it seems like Asad and Zoya’s life is going to take a 360 degree turn and whether these changes are for the good or bad only time will tell.

In the current scenario the viewers are liking the lovey dovey, sweet lover spat phase in Asad and Zoya’s life and also enjoying the fresh love phase between Ayaan (Vikrant Massey) and Humeira (Ketaki Kadam). Alongside this love track, the audiences are also witnessing Najma (Nehalaxmi Iyer), all set to tie the knot with Imran (Vikram Singh Chauhan) and Nikhat (Archana Taide) giving her consent to wed Farhan (Vishal Nayak). It would be interesting to see, if at all Asad and Zoya get lucky the third time and say the pure phrase ‘I Do/ Qubool Hai’. But the question remains ‘will they or won’t they?’.

The new promo of the show has indeed created sense of doubt in the minds of the audiences and also has created a sense of panic regarding whether separation of the lead couples is on the cards.

Zoya who has already got her doubts regarding the relationship shared by Tanveer (Amarpali Gupta) and Imran. It is for sure that she would surely investigate the matter further. We wonder if her quest for the truth would land her in a new mire of trouble.

With Tanveer and Vikram (Nitin Goswami) back in the picture things are ought to get complicated and take a new turn in the show. She may as well try and create discrepancies in Asad and Zoya’s smooth sailing life but she can never separate the two of them. Even if she, with her evil intentions succeeds in separating the duo, but in their hearts Asad Ahmed Khan would always belong to Zoya Farooqui, his ‘Museebat’ and Zoya Farooqui would always belong to Asad Ahmed Khan, her ‘Akdoo’.

Life is strange and love is stranger. There comes a stage in life when the phase by thy name “Test Of Love” knocks on the fate of true lovers and it seems like ‘Muqaddar Ka Khel”. Destiny’s Play in the show will exactly showcase that. The new promo showcases Asad and Zoya in a playful mode and Humeira all happy. But the presence of Tanveer in the promo disrupts the peace and Zoya ends up falling and Ayaan holding her. Putting our thinking caps on we think that Tanveer will play her card to separate Asad and Zoya. In all probability Ayaan and Zoya might get trapped in Tanveer’s trap where destiny is playing its card and Asad and others might be made to believe that Ayaan and Zoya are a couple.

On this do we see the readers of the article shaking their heads in a vigorous clear cut ‘NO’? but…but…but they say ‘Man Proposes, God Disposes’, we wonder if Asad, who is aware of Tanveer’s evilness, who is aware of his dear brother’s feelings for Humeira and who is also aware of the extent to which, his Ms. Farooqui loves him will he fall  prey to Tanveer’s evil intentions.

The current track is surely gripping the audiences’ interest as they want to know what repercussions the unfolding mysteries will have in Asad,Zoya, Ayaan and Humeira’s lives, who are currently swaying in the world of love. They say every action has an equal and opposite reaction. In the coming episodes, it will be crystal clear where the action, decision and reaction of the protagonists and the antagonists of the show, lead the story. In between the good and evil who will have the last laugh is to be seen.

For now the audience can bite their nails watching the current phase in the show and anticipate ‘will they or won’t they tie the knot?’

Don’t forget to watch Qubool Hai; Monday to Friday at 9:30 PM, only on Zee TV.

Disclaimer: The above article is a property of Fuzion Productions; please do not copy paste/Print Screen the article and share elsewhere. Share the link of the article at other places and write your views in the comment box. Thank You.