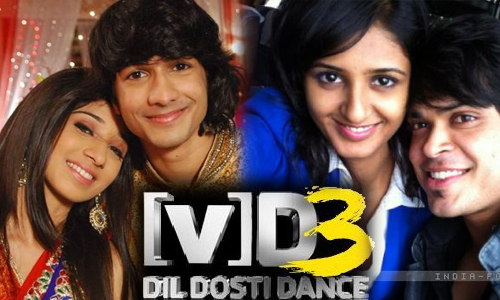 Swaying To The Rhythm Of Love And Pain – Dil Dosti Dance

Cinevistaas Dil Dosti Dance on Channel V is all about dance topped with oodles of friendship and love. Recently the show saw the comeback of the character of Kria Ghai played by Shakti Mohan. This development left Rey and Kria fans overjoyed. The current scenario in the show is surely keeping the interest alive and intact.

On one hand the audience witnessed Rey’s (Kunwar Amarjeet Singh) indifferent behaviour towards Kria, where he wanted to prove to himself more than others that he does not have feelings for Kria. He kept on trying to push Kria away but call it love, fate or their Dil Dosti and Dance, it keeps on binding the two of them together. If Rey and Kria’s story is slowly getting back on track, the story of Swayam (Shanthanu Maheshwari) and Sharon (Vrushika Mehta) which seemed slowly but steadily progressing towards the path of recovery.

In case of Rey and Kria it seems like the wounds of their past is no longer haunting them and that they have found a common ground. Going by this we can surely say that Rey and Kria’s wounds are healing in each other’s presence.

In the recent episode during the St. Louis Annual Day Celebrations, the audience witnessed Swayam telling Sharon that he knows her real agenda of befriending Kria. Thus this has brought upon hurt, pain and put breaks on Swayam and Sharon’s budding relationship.

While all this is a big misunderstanding since Swayam never heard Sharon’s part of the conversation that though she started befriending Kria only for Swayam but now she considers Kria her friend truly. Swayam just heard the earlier part of Sharon’s conversation with Simmi (Samentha Fernandez) and but he missed the later. Thus it has become a ‘Khichdi‘ of misinterpretations.
Swayam and Sharon love each other truly whether they accept it or deny it; their heart will always carry feelings for one another. Dance being the centre of this show, in the recent episode the audience witnessed Swayam and Sharon sharing the stage and delivering a heart wrenching ‘Alivida‘ (from D-Day) dance expressing their longing, pain and anguish for being on two different paths and their hearts squeezing their lives out for the lost love.

From an audience’s point of view it was indeed painful to see Sharon and Swayam go through this phase of anguish. Actors Vrushika and Shantanu did a commendable job.
Rey and Kria : The Return of the Lost Love

Rey and Kria share a past together, the past which connects them also has given them scars to remember. With Kria back in the picture it was clear that Rey’s hidden wounds are ought to open up and that is what was seen happening in the show. Rey with the wounds of the past is trying to push Kria away with all his might and Kria is looking for ways to get through Rey’s built up walls. In between this one cannot deny the fact that the attraction and love that Rey and Kria shared in the past is still there but is hidden in the depths of their hearts.

In the very recent episode the audience witnessed Rey and Kria dancing to the rhythm of ‘Khuda Jaane‘ from Bachna Ae Haseeno. The dance was beautiful and in a way showcased Rey and Kria’s lost love coming back to them. Their dance depicting the emotion of love was indeed mesmerizing. Amar and Shakti yet again proved their magical chemistry as Rey and Kria with this dance. We are sure many number of fans would have smiled seeing Rey and Kria sharing the stage together yet again and setting the stage up in blazes of fire with their chemistry. Kudos to both the actors for putting up a brilliant performance.

Dance – The Meeting Point of ‘Dil’ and ‘Dosti’

They say at times ‘Dance Speaks’ and from the audiences’ point of view one could easily say that Dance truly speaks volumes. Whether it was expressing Swayam and Sharon’s anguish or representing Rey and Kria’s healing wounds, their dance depicted their inner self which they buried inside their beating hearts.

Dance is the one factor which brought the whole D3 Gang and Swayam-Sharon, Rey-Kria together in the first place. It was their love for dance which brought them together, later friendships were born and the feeling of love blossomed. We believe even this time Dance will be the binding factor and will get Swayam and Sharon back together and also heal Rey and Kria’s wounds of the past for a fresh start together.

In the current scenario with Rey taking Kria’s responsibility to take care of her, we think this will surely help Rey and Kria to find a way back to each other with their love and we also hope that Simmi comes back soon and clears the misunderstanding between Swayam and Sharon.

Things and the story line are certainly looking up for Dil Dosti Dance with love and pain topped with the essence of dance. Do let us know if you did watch Swayam, Sharon and Rey, Kria emoting their feeling via the medium of dance in the comment section.

Stay Tuned To Fuze For More Updates on Indian Television.