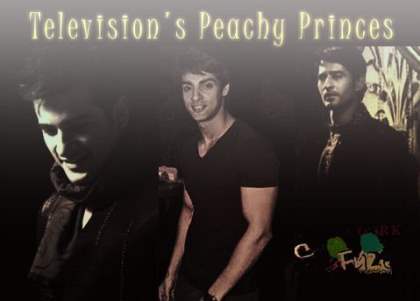 Media has influenced us more than we admit. It influences our fashion sense, our lifestyle, career choices and our love life. There was a time, when little girls read fairy tales before bedtime and dreamt of their Prince Charming at night. Now the little girl has become a teenager, yet not much has changed. Granted she is a bit wiser and in touch with reality, her dream guy still lives within her. Technology has taken over and her dream guy has projected from the story book to the television screen. Young women often fall in love with central characters of the show, not only for their good looks and abilities but for theÂ prince like characteristics they emulate. They identify with the characters and often fall hopelessly in love with them. Fuze got in touch with some of our fans to find out who their Prince Charming is and why?

The first name on the list of Peachy Princes is undoubtedly Karan Tacker. Karan began his career by playing the hot and sexy Sameer on Star One’s’ Love Ne Mila Di Jodi and later as Shaan on Rang Badalti Oodhani. As Sameer and Shaan,Â Karan accumulated quite a fan base but hisÂ portrayalÂ of Viren Vadhera is what made women melt.Â Preet Kaur said “I love Karan Tacker as Viren because ofÂ Â his soft/caring/loving/nature. His charming smile with hot looks! Fell in love with him from his entry in the show. I love the way heÂ showsÂ his love for Jeevika,Â especiallyÂ before marriage. One scene where his badi ma was angry at Jeevika for refusing to wear certain jewelry & the way he explainedÂ “ki main apse pyaar karta hoon par main Jeevika se bhi bahut pyaar karta hu” I donâ€™t know just the way he said it I fell in love with him. Also after marriage how he stood by her no matter what!“

While Viren has an astounding fan following of his own, Shaantanu fans canâ€™t seem to let go even after the show ended. Loyal Shaan fans hold his image dear to their hearts even today. One fan, Jennifer Govekar says, â€œHe carried off the dynamic nature of his good-hearted and easy to relate to as a character well while his maturity was shown splendidly over time. His pairing with Yashashri Masurkar brought out the best in him as they both complimented each other well. Appreciate RBO from stepping outside the bounds of overly done saas-bahu sagas. The show gave equal importance to both leads, there was no gender bias either.â€

Prince number two is no mystery. This lovable actor is adored by girls world-wide. His playful nature and mischievous acts have become his USP. Karan Wahi, the name says it all. Karan began his career as Ranveer in Star Oneâ€™s popular youth based show Remix. His pairing opposite ShwetaÂ  Gulatia, as Tia, was appreciated by many. Girls fell in love with the way Ranveer loved Tia. Thereafter, Karan Wahi played various characters in shows but his most popular would have to be a tie between Siddharth Modi and Rohan. While Siddharth (Sid) taught girls the art of true love and sacrifice, Rohan taught girls how to be a good friend. Fan Fahmida Chowdury tells us, â€œKaran Wahi as Dr.Siddhant Modi. He was always there for his wife and supported her both mentally and physically in every way possible when she was going through a hard time. It’s really hard to pinpoint certain lines which were special because from Day 1, every scene he did was special. He is an enigmatic avatar and a perfect example as to how every husband should be like. I think no one else could’ve projected the character so flawlessly the way Karan Wahi did. Karan Wahi is a unique actor who got a very unique character. Also I love Karan Wahi because not only he is good at his profession; he treats his fans equally as if were family. I love him for that.â€

For those who have been watching Indian television for over a decade, no one can compare to our final Prince. Not only is he a picture perfect dream guy on screen, but resembles the same in real life. A loving husband and father to a pair of adorable twins, he is none other than Hiten Tejwani. When we think of Hiten, we automatically assume the name Pratham Mittal. Pratham was his first character on Indian Television. While people loved Pratham, they were floored with Karan Virani. Once again paired opposite his real life love, Gauri Pradhan, Hiten Tejwani tore the screen apart with his portrayal of Karan Virani. Karan was the ideal husband and sweetest father. Fans like Khushi Dutta, Agnitri Roy and Akash Sharma still canâ€™t get enough of Karan Virani even today. â€œHiten Tejwani’s Karan was awesome.â€

These are just a few of our Peachy Princes that fans have adored. Iâ€™m sure there are more on your list. Tell us about them. Tell us what you love most about your dream man.