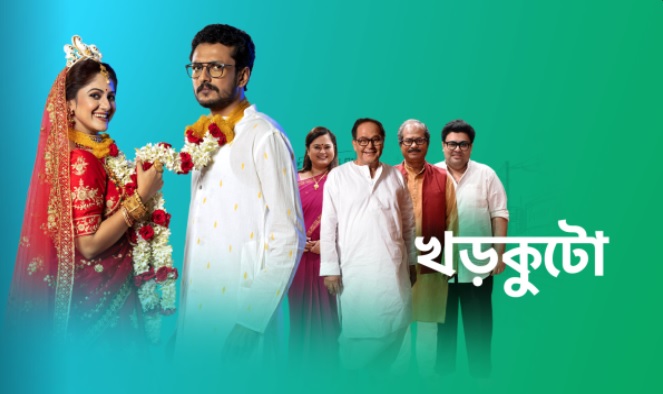 This new show titled as ‘Khorkuto’ on Star Jalsa has started since August 2020. And needless to say, it is doing extremely well on the charts. By October 2020, the show grabbed the 2nd spot on the TRP charts and now has become one of the most loved show on Bengali television.

Since, Star Plus has a very god track record of remaking successful Bengali shows, why not this one? Presently the Hindi GEC space really has very less unadulterated romantic comedy shows. In fact, the current ones do not really impress many people who want to watch a family show that can appeal to youth too and be lighthearted at the same time. Khorkuto actually fits the bill there. It’s one of a kind show on Bengali television and might bring some crazy youth fans to the show if made in Hindi and other languages too.

The best things about Khorkuto are the following –

1. The story revolves around a big fat joint family in Kolkata who live together under one roof. The family is fun loving, extremely liberal and has a gang of crazy youngsters who keep the elders always on their toes. Anyone who comes in touch of this family, falls in love with their simplicity yet ‘always enjoying life’ kind of lifestyle. This family makes every scene in the show a laughter riot. This family is also the hero’s family who by profession is a scientist. He behaves like a scientist too, talks less, sings well and is a matter of entertainment for his siblings and one young chacha in the family. They all live, laugh and love together in life.

2. The heroine on the other hand is someone who is bad in her studies. She is extremely talkative, too naive for the world, very straightforward, very childish, very pampered. When she meets the crazy young gang of the hero’s family, it’s like two missing pieces joining together. She being a jovial person starts enjoying their crazy stunts too. She loves their happy go lucky lifestyle and they fall for her innocent and childlike attitude. Very strange reasons to choose a girl for your scientist lad, isn’t it? That’s how the show actually pulls you! Nevertheless, she is the only daughter of parents who are extremely successful doctors. However, her mother leaves her alone at a tender age and she is brought up by her father and bua. Her mother despite being an Indian behaves like a foreigner and her father is obviously quite a desi individual. Her father realises that his daughter is quite naive for the world and she will face difficulties in life but the hero’s family are people who would actually pamper her and preserve her innocence rather than using the same.

3. There’s also an unmarried bua of the hero who is a teacher and her backstory in life is also quite interesting and may give a good message to the viewers.

In short, the show is filled with nice people. There’s no vamp or villain as such. The heroine’s mother with her foreign inclinations may irritate you and at the same time may make you laugh too.

All the mothers in law in the show are too good to their daughters in law. In fact, daughters in law behave in a more friendly way than daughters to their in laws. The son in law loves his in laws’ family so much that he ends up most of the time at their place with his brothers in law pulling each others’ legs. He doesn’t have a boasting ego about people calling him a ghar jamai. The son in law’s parents also are fine with it. In fact they also love the family in the same manner. All these may sound too good to be true. But that’s how simple and fun loving it is in the show. And the audience have loves the same.

Times are too difficult for people these days. Good people, good messages, positive vibes, effortless laughter, lighthearted storyline and natural performances – All these together have made Khorkuto an instant hit on the Bengali television arena and if made in Hindi, it will delight the Star Plus viewers also in the same way. It’s a delightful show and deserves to be made for national audience and in other regional languages too if possible.