Home ENTERTAINMENT WEB SERIES The Best ALTBalaji Series’ We Have Watched Till Date!

The most loved application for the digital content, ALTBalaji has given us numerous beautiful web series to binge on ever since it’s inception.

There is a saying that we cannot please everyone but ALTBalaji has taken upon itself to prove that wrong as they have something for everyone and it’s the best thing about their series’.

What we are trying to say is, if one of the series is on the bold topic, the other one would be a simple love story with touching moments while the next one would be an action packed series. So, the app has different content for every section of audiences’ out there in the palm of their hand.

Starring the talented Nimrat Kaur in the lead role of Captain Shikha Sharma, The Test Case is the story of the struggles and challenges a woman has to go through to prove that she is as capable as any man out there and that she can do the same thing with even more efficiency than any man.

Also Read : Our Recommendation – 7 Web Series That You Must Not Miss Watching!

Captain Shikha Sharma being the only woman in the squad of Indian Army officers training for special services overcame the struggles with her will power and intelligence and emerged out as a winner.

Based on the book, “India’s Biggest Cover-up” by Anuj Dhar, this ALTBalaji series left us wondering what’s the actual truth?

Rajkumarr Rao did an amazing job as the lead and was appreciated by one and all.

This ALTBalaji series touched hearts in more than one ways. It showcased the lives of women in Kashmir. They are not even free to dream and if someone dares to dream and takes a step towards fulfilling it, they are called names and considered no less than a criminal.

Also Read : Why Haq Se Is A Must Watch? – These Iconic Dialogues From The Series Say It All!

Haq Se season 1 ended on a sad note and we are hoping, season 2 is comes soon and has a happy ending.

As the name suggests, it’s the story of two broken hearts. The series is a beautiful watch for how Veer and Sameera gathered themselves and their broken hearts and moved on towards a bright, happy future.

Also Read : Broken But Beautiful : Broken Can Be Beautiful ; All It Takes Is A Step From Pretend To Mend – TRAILER REVIEW!

This ALTBalaji series is from the first lot of shows on the ALTBalaji app and it’s one amongst the most loved series ever.

Also Read : Karrle Tu Bhi Mohabbat Season 3 Is All About Getting Back At Each Other To Getting Back Together! – A Must Watch! #Review

Karele Tu Bhi Mohabbat’s fourth season is awaited by the fans with the same excitement as season one and the sole reason are the leads – Ram Kapoor and Sakshi Tanwar. Their crackling chemistry is the USP of the show.

The series had a complicated and bold concept but interestingly the second season of Kehne Ko Humsafar Hain was more loved and appreciated than the first because it’s in the second season, we got to see a sensitive but sensible Poonam.

It was refreshing to see her character being evolved into a wise and mature woman.

This ALTBalaji series is loved for it’s simplicity. It’s a beautiful love story with no complicated and imposed twist and turns which makes it a delight to watch.

Watching it makes you as happy as Baarish after scorching June heat.

After watching this ALTBalaji series, one is left with the same warmth and emotions that one feels while entering and leaving one’s home

One cannot help but get overwhelmed by emotions while watching this full of emotions series.

This sweet, spicy web series on ALTBalaji offered a full on masala platter of entertainment. Revolving around the kitchen and the lives of two chefs Vikram and Nithya, the series made you smile, cry and crave for food.

Entangled in their past and present, as sometimes the dish Vikram and Nithya cooked turned good and at times turned bitter, the viewers got absorbed into their tale, like salt in a savory and sugar in a dessert. Rajeev Khandelwal and Divyanka Tripathi Dahiya with their fabulous performance brought the characters to life.

It Happened In Calcutta –

It Happened In Calcutta is one of the web series that released this year on February 29th. Ken Ghosh directed the web series. Actors Karan Kundra and Naghma Rizwan portrayed the lead characters.

The story of It Happened In Calcutta is set in the 1960’s and 1970’s, it brings back the feel of retro love stories. The story has very interesting twists and turns. Set amidst the plot of an epidemic spread, a war situation and political unrest, Ronobir and Kusum’s romantic saga is entertaining. The series was appreciated and with the 1st season more or less ending on a cliffhanger note, the viewers are looking forward for season 2. 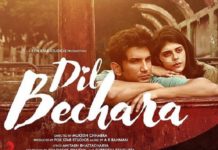 Sushant Singh Rajput’s Dil Bechara To Stream On Disney+ Hotstar From This Date Of July 2020!