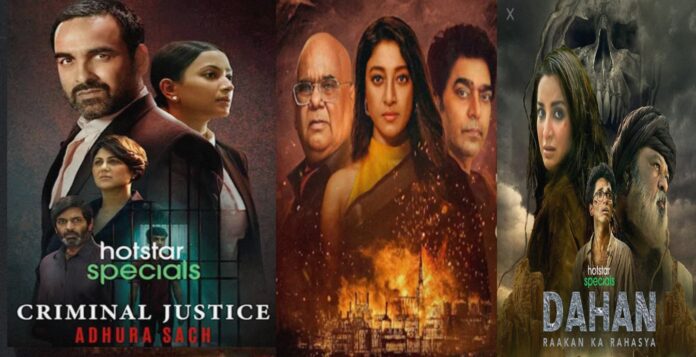 Weekend is around the corner and we are here with the list of top 3 new Hindi Web Series on Disney+ Hotstar for you to binge watch!

1 – Criminal Justice : Adhura Sach –  The season 3 of this Hotstar Specials hindi web series is as good as it’s previous two seasons. Actor Pankaj Tripathi as advocate Madhav Mishra steals the show yet again with his simplicity as he solves Zara’s murder case without any help from the police and delivers justice to his client, Mukul. The story will get you hooked from the very first minute it self and you can’t help but binge watch all the eight episodes.

The series is produced by Applause Entertainment in association with BBC studios.

2 – Karm Yuddh – The Hotstar Specials web series became one of the most watched web series in it’s launch week it self. The fight for power within a rich Bengali family of Kolkata, with ace actors Satish Kaushik, Ashutosh Rana and Paoli Dam is winning hearts for it’s storyline and performances.

Produced by Kailashnath Adhikari under the banner of Sri Adhikari Brothers Enterprise, Karm Yuddh is directed by Ravi Adhikari.

3 – Dahan – Raakan Ka Rahasya – This supernatural thriller series will scare and intrigue you at the same time. The constant battle between blind faith and reality, between myth and facts will keep you hooked to the show.

Even though the writing is weak with some illogical scenes and dialogues, this series can turn out to be a good watch.