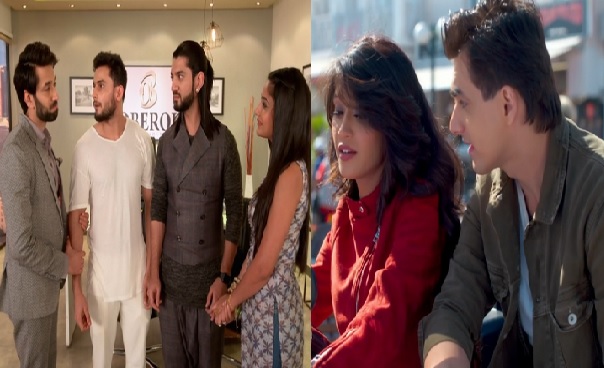 Indian television shows churn out some interesting twists and turns to keep the interest of the audience intact.

From time to time every show has a new twist up its sleeve and these twists are served to the viewers on a platter.

Star Plus’ two very popular shows too are going to see some very interesting and intriguing twists in the coming up episodes. And we are here just to make you aware of the upcoming twist in tale.

So without further ado, here are the latest spoilers of your favourite shows Ishqbaaz and Yeh Rishta Kya Kehlata Hai.

Star Plus’ Ishqbaaz promises to be one interesting tale in its upcoming episodes. With the plot thickening in the show, the daily soap has loads to offer the viewers.

The current track in the show focuses on Svetlana regaining an entry into the Oberoi mansion. With the situation turning murky, it is Shivaay who finds himself stuck in the mess.

With the plans of the evil getting stronger, Svetlana will weave her web of misunderstandings in the Oberoi family.

Shivaay will be forced to transfer, Om and Rudra’s property shares to Svetlana and on this account Shivaay will face a lot of flak from the family.

Moreover Anika too will be seen disappointed with Shivaay’s actions and ShivIka will go through a long fight as usual with their tadi and tashan.

On the other side Rudra will realize Bhavya is not married and on realizing his fault he will seek Bhavya. And it is during this time Rudra’s wife Soumya will mark her re-entry in the show.

Adding to the existing villains, Shivaay’s ex-fiancé Tia (Svetlana’s sister) too will make her re-entry and only time will tell if Tia is a foe underneath the mask of a friend or a friend coming across as a foe.

She will be hit by Shivaay’s car and post the accident, he will bring her home. But Tia will be shown pretending to lose her eyesight.

The dark clouds are looming around the Oberoi mansion and looks like the thunder of the dark clouds is going to be taken by Shivaay and Anika.

The show is headed to the Vanvaas track with the Obero household’s Ram and Sita – Shivaay and Anika leaving their abode as Jhanvi would be taking an unbreakable vow from Shivaay post which, he will decide to leave the Oberoi mansion along with Anika!