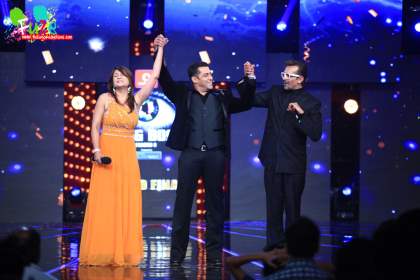 Mumbai, January 12th, 2013: Successfully completing her stay of 98 days inside the Bigg Boss house, Urvashi Dholakia has been declared as the winner of the biggest reality show, Vodafone presents Bigg Boss Season 6. Bringing an alag season this year, COLORS has presented its viewers with unlimited entertainment and daily dose of drama. Locking up different personalities in the house for over a period of three months, the show has presented viewers with various shades of their favourite celebrities. Surviving the toughest challenges that changed her personal chemistry with the co-contestants to earning the audienceâ€™s love, the no-nonsense and woman in control, Urvashi Dholakia has emerged victorious and walked away with the grand prize of Rs. 50 lacs and Bigg Boss Season 6 trophy. Giving Urvashi a tough run were Imam Siddique, who emerged as the first runner up and Sana Khan as the second runner up.

Urvashiâ€™s journey in the show was no easy task. Living away from her sons for 3 months, Urvashi has proved it to the world that she is a tough single mother. From sailing through fights with a brave face to putting up with Bakhtiyarâ€™s allegations on her character, Urvashi showcased an admirableÂ sportsmanship and spirit required to play the game. She has proved that she is a woman with nerves of steel and has fought every obstacle while changing situations to her advantage. Urvashiâ€™s commitment towards playing the game with utmost diligence was evident while executing all tasks with dedication and more so when she took on the secret task given to her by Bigg Boss. This task was going to test her equation with the housemates, almost making all of them stand against her; she took on the challenge bravely without batting an eyelid.

After being announced as the winner of Vodafone presents Bigg Boss 6, an ecstatic Urvashi Dholakia said, â€œPacking for 3 weeks, I came with a thought of not staying long. The excitement, the adrenalin, the whole experience of surviving the countryâ€™s biggest show is unbelievable! I had never imagined I would last till the end and emerge as the winner after all the madness, drama, fights, cries and what not! I dedicate this victory to my late father, my fans who supported me, without them this would not have been possible. Having my own share of ups and downs with each of my co-contestants, I definitely need to credit them for putting up with me and making this journey worthwhile. There is a lot that I am taking back with me from this experience of Bigg Boss Season 6.â€

Commenting on the season, Manisha Sharma, Weekend Programming Head, COLORS said, â€œWith Bigg Boss Season 6, we have changed the game â€“ right from the treatment to the format to introducing never done before elements. This season was created to attract more family audiences that pushed us to constantly innovate, adding a lot of parivarik punch with the mix of celebrities to the variety of tasks. Besides this Salmanâ€™s charm and audience connect has worked in our favour and taken brand Bigg Boss notches up. Looking back, we are happy that weâ€™ve managed to achieve what we set out for.â€

Speaking about the format and the show, Deepak Dhar, CEO, Endemol India said, â€œThis season, we have innovated, taken risks and introduced surprising elements that differentiates this season from its previous editions. Be it the new padosi house, or bringing the family members in the house, that created controversy, panic room, flash mob, LVA tests, Bigg Boss Season 6 has always been one step ahead of the viewers and has lived by the philosophy of expect the unexpected. And as we close this season, we are proud of the content and the high achieved with this show, making it truly an unpredictable and unparalleled format on Indian television.â€

The Grand Finale night was truly magical, filled with performances by the whoâ€™s who of television and Bollywood. Superstar Salman Khan started the evening with his trademark performance on Bigg Boss title track intersperse with his dialogues from his movies. He was joined by the God of dance aka Prabhudeva and Remo Dâ€™Souza who came to promote their upcoming flick â€“ ABCD. Emraan Hashmi also joined Dabangg Khan on television for the first time and spoke about his upcoming movie â€“ â€˜Ek Thi Daayanâ€™ after shaking performing leg with the bahus of television. The ex contestants also took to the stage, leaving the crowd awestruck. Some of the leading ladies from Telly town like Rashmi Desai Sandhu, Rati Pandey and Pooja Gor made their presence felt with power packed performances. Sampat Pal added her bit by putting up an act on women empowerment that left one and all thinking about the issues faced by a lot of women in the country. Dinesh Lal Yadav aka Nirahua danced to a hip hop number while Sapna entered in an all new Indian avatar with her trademark dialogue â€˜Ullu banaya, bada mazza aayaâ€™. Vishal and Karishma were seen dancing together inside the swimming pool on a sizzling romantic number. Neha Dhupia and Tushaar Kapoor added to the fun by giving a sneak peek into the hilarious gags that will be seen on their upcoming comedy show â€“ â€˜Nautanki â€“ The Comedy Theatreâ€™. Bollywoodâ€™s newest Laila aka Yana Gupta was seen dancing in the garden area as a huntress on the prowl to get her next prey.

The Alag Season of Bigg Boss definitely has been a memorable journey for all the contestants. From revealing the Padosi ghar, to going out of the house to a mall to shop for luxury budget, this season has definitely been filled with maximum number of movers and shakers! 3 months of staying away from family and giving up all sorts of luxuries and comforts, these 19 contestants have discovered their true selves. Being the most celebrated and awaited reality show, Bigg Boss will continue the legacy of delivering unmatched drama and action in seasons to come!