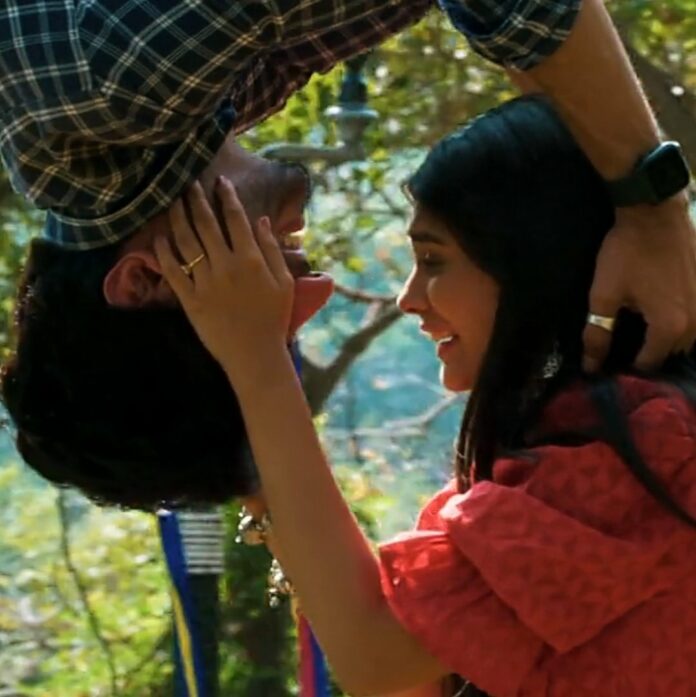 Yeh Rishta Kya Kehlata Hai’s most awaited moment of the current track is finally here and the fans just cannot stop gushing over the same. Akshara, played by the beautiful Pranali Rathod confessed her love for Abhimanyu, essayed by the handsome Harshad Chopda and the scene is not just beautiful but too unique as well, for words.

Abhimanyu went all Spiderman style and must say, Harshad’s fitness came in handy for this. Well, Mr.Handsome Chopda aka Harshad Chopda has always impressed one and all with his acting skills and his fitness videos on Instagram are such a delight to watch.

The way Akshara confessed her love.. it was overwhelming to watch and you could feel for her in that moment. She realized, she was wrong in prioritizing her sister’s happiness over hers’ and Abhimanyu’s and the fear of losing Abhimanyu reflected in her body language and her voice. Pranali Rathod did a great job there and deserves appreciation for the same.

The Love confession was followed by an emotional confrontation and all in all, today’s episode is going down in the history for sure.

Also read – Fans Write About 3 Things They Love The Most Post Leap And Harshad Chopda Tops The List!

The episode will air tonight but since it’s available on Hotstar and fans have already expressed their love for the their favorite, #AbhiRa. Have a look at some of the tweets below –

The proposal one of a kind ❤
the proposal which hs nvr been shown on ITV earlier n will nvr be shwn
Glad got to witness something so inexplicably beautiful❤
Harshad N Pranali were exceptionally outstanding dnt hve words
Truly Amazed crying crying happy tears ❤#yrkkh #AbhiRa pic.twitter.com/ICGGQSBQpc

The way the entire fandom knew that this angry young man gonna go so soft for her the moment she does this coz we watch the show, we know the characters…..but no, aa gaye kuch log 30 second ki clip ko judge karne. Kar lia? Mil gayi Shanti? Ab bolo….bOLo Ab??#yrkkh l #AbhiRa pic.twitter.com/wIOSuzj4n4

The way she is cupping his face🤧❤
And the happiness on Abhi’s face😭
Can’t wait for tomorrow’s episode! 🥺#yrkkh #abhira pic.twitter.com/ADiccoGGgF

How on earth we got so lucky with da casting..! HC is something else tbh..His every ‘Kyun’ 2day portrayed different emotions & da way Pranali is playing Akshu, no 1 else could do this perfectly..Surpassing herself everyday❤️

The way he forgets all his anger after seeing her panicking !! This scene was just so painfully beautiful 🥺❤️#AbhiRa #Yrkkh pic.twitter.com/4mIfpEs3JI

he just can’t hurt her, can he ? no matter however much he is hurting#yrkkh | #AbhiRa pic.twitter.com/uwswQLMo5B

harshad & pranali in emotional scenes >>> 💥
also the softness in abhi’s tone while seeing his akshu cry ahh he loves her so much 🥺💗#yrkkh | #abhira pic.twitter.com/WRO28IMsPX

You say soulmates, I hear Abhira

How softly he rested his head on hers 💕❤😍#abhira #yrkkh pic.twitter.com/M3hcIHsFVp

Show me a better confrontation scene than this.

The number of KYUs Abhi asked, the number of times she said BAS, these two words were enough to make us feel how desperate he is to get his answers and how helpless she is that she couldn’t give him all those ans. #yrkkh #abhira pic.twitter.com/P5i4ERd0OI

the spiderman parallels 😭 as a marvel fan this was very satisfying to watch ! it was so raw, natural and effortless im in awe of these two #yrkkh #abhira pic.twitter.com/Mzjpi1AsPt