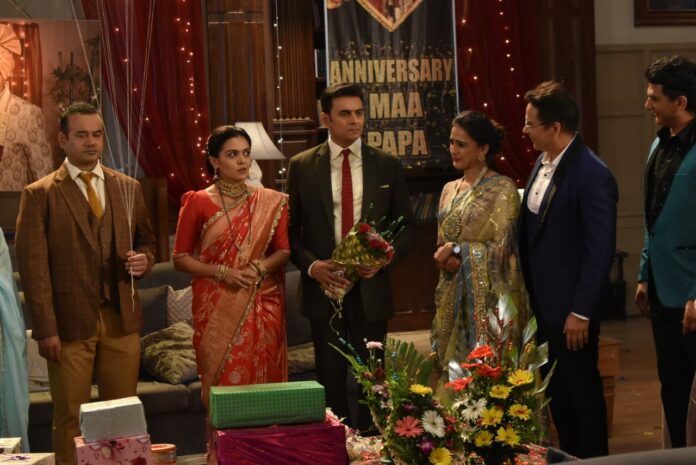 The Saturday episode of Rajan Shahi’s “Yeh Rishta Kya Kehlata Hai” started with Abhimanyu checking Rudra when Rudra tells him how beautiful Aarohi is and that he has asked her to come to his farmhouse for a party. Abhimanyu tells him that he respects all the female employees of his hospital and asks him to keep himself away from them. Later, Abhimanyu gets a call from Manjari and she tells him that she has made some snacks for them for the trip.

She also tells him that she will miss her and that because of her she doesn’t feel lonely in the house. She then said that because of Akshara her wedding anniversary day didn’t feel the same. Abhimanyu then remembers what had happened on his parents’ anniversary many years ago.

Meanwhile, at the Birla house Akshara gets ready and then later meets Manjari and asks her to wear her wedding saree. At the same time, Aanand tells Harsh that they should go out for dinner but he refuses saying that he doesn’t want to celebrate this day.

After a while, Harsh finds some gifts and bouquets on the table and tells Aanand and Mahima that people don’t know what kind of day it is for him. He was telling them that if there was a party the Goenkas would have definitely come and that would have troubled him even more. Just then the whole Goenka family comes there and wishes him.

They then notice Manjari coming and Mahima tells Harsh that she is wearing her wedding saree. Akshara then surprises them with a banner wishing them. The Goenkas sense that the Birlas are not quite happy with the surprise. Akshara thinks she should keep them busy before Abhimanyu comes and sings “Piya Tose Naina”. Just then Abhimanyu reaches home and gets angry seeing the party.

In the upcoming episode, we will see that Akshara hears Harshvardhan telling Manjari that she could have stopped her daughter-in-law and also tells her that he will take his revenge now. Later, Akshara tells Abhimanyu that her family is asking her to come with them, and an angry Abhimanyu asks her to go. To know what happens next, keep watching “Yeh Rishta Kya Kehlata Hai”.