It is said a child’s heart is the purest and the wishes they speak of comes directly from the heart.

Luv and Kush reached their elder brother Kartik and very innocently remarked to Kartik in their words, that they want him to patch up with their Bhabhi.

Wishing for Naira and Kartik to patch up and asking Kartik to call up Naira – though the words touch a raw nerve for Kartik, yet the request of the innocent hearts cannot be ignored.

Their earnest plea asking Kartik to stop fighting with Naira and patch up with her is hard to overlook and the innocent heartfelt wish tends to touch hearts and it is their thought that counts! 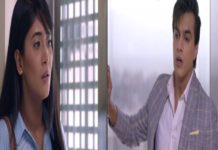 Moments Of The Day

Moments Of The Day